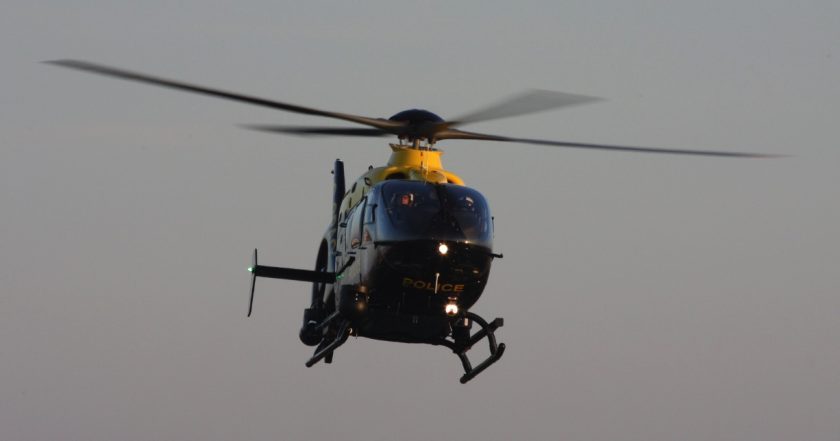 A man who flashed a high-powered lamp at a police helicopter whilst it was searching for a missing person in the Bangor area has been given a suspended prison sentence.

18-year-old Kevin Riley of Greenacres, Llandygai Road, Bangor was sentenced at Caernarfon Crown Court on Wednesday after pleading guilty to acting in a manner likely to endanger an aircraft, obstruct police and behaving in a threatening manner and was given a six month suspended sentence and ordered to carry out 180 hours of unpaid work.

The National Police Air Service helicopter was above the Bangor area just before 11pm on July 23 last year after they had been called to assist in the search of a high-risk missing person.

Police were notified that a high powered lamp was being shone at the aircraft and an officer was immediately dispatched to the area.

The officer found the 18-year-old on the Llandygai Industrial Estate where he was arrested and taken into police custody.

A 47-year-old man who was with him at the time was also arrested on suspicion of using threatening and abusive words and he was later cautioned.

Steve Jones, National Police Air Service Assistant Operations Director for North Wales, said: “Shining a light at an aircraft causes a dangerous distraction which could endanger the crew and people on the ground. We welcome the prosecution and hope that it serves as a deterrent for anyone thinking of doing the same.”

At the time of the incident the aircraft was assisting local officers who were searching for a high risk missing person.

The helicopter was over a built up area and this had the potential to lead to catastrophic results both for the helicopter crew and innocent members of the public below.

This type of behaviour will not be tolerated and we will robustly deal with anybody caught behaving in this manner and bring them before the courts.”

The NPAS helicopter was from Hawarden, one of 14 National Police Air Service bases providing borderless air support to all police forces in England and Wales.