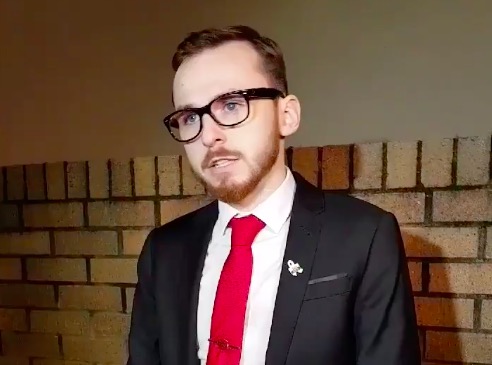 The son of late Assembly Member Carl Sargeant says he will be a champion for Alyn and Deeside “just as my dad was”  and wants to continue his fathers legacy.

Jack Sargeant, 23, was chosen by Labour party members as the party’s Assembly candidate in a secret ballot at a hustings event in Connah’s Quay Civic Hall on Wednesday evening.

He secured the nomination with over 50% of the vote ahead of the two other candidates Carolyn Thomas, county councillor for Treuddyn and Hannah Jones, a Saltney town councillor.

[miptheme_quote author=”Jack Sargeant Alyn and Deeside Labour Party Candidate Alyn And Deeside ” style=”text-left”]I am humbled and honoured to have been selected as Labour’s candidate to contest the Alyn & Deeside by-election on Tuesday, 6 February.

I would like to thank local Labour Party members for the faith they have placed in me.

I will be standing on a platform of being a powerful voice for local people – in the proud tradition of my father.

I will also be seeking justice for him – getting to the truth about the chain of events that led to his premature death. From tomorrow I will be out and about on the campaign trail right across the constituency – listening to local concerns about the economy, health and education.

If elected, I promise to champion North Wales interests on all these issues. Whilst friends from the wider Labour family across Britain will be welcome to visit and campaign alongside us to secure victory, I want to emphasise – this will be a locally run campaign.

I take nothing for granted in this by-election. But I believe my Labour values and my commitment to work tirelessly to ensure those values deliver for local people can win through on 6 February.[/miptheme_quote]

Standing outside the Civic Hall and flanked by Ken Skates AM the Welsh Government Cabinet Secretary Mr Sargeant said:

“I am humbled and honoured to have been selected as Labour’s candidate. I would like to thank local Labour Party members for the faith they have placed in me.”

Jack Sargeant “I’m standing here today to be a champion for Alyn and Deeside, just as my Dad was” pic.twitter.com/dZCuIwouuS

“The members of Alyn & Deeside have made their choice clear. With Jack achieving over 50% of the vote in the first round clearly shows that his own mandate resonated with the members.

I along with others will be very much looking forward to campaigning in the weeks ahead.”

The by-election for vacant Alyn and Deeside seat will take place on Tuesday 6 February.

Broughton and Bretton community councillor Donna Lalek has been chosen to stand as a Welsh Liberal Democrat candidate.

UKIP said they will not field a candidate if Jack Sargeant is chosen by labour, “out of respect to the late Carl Sargeant.”