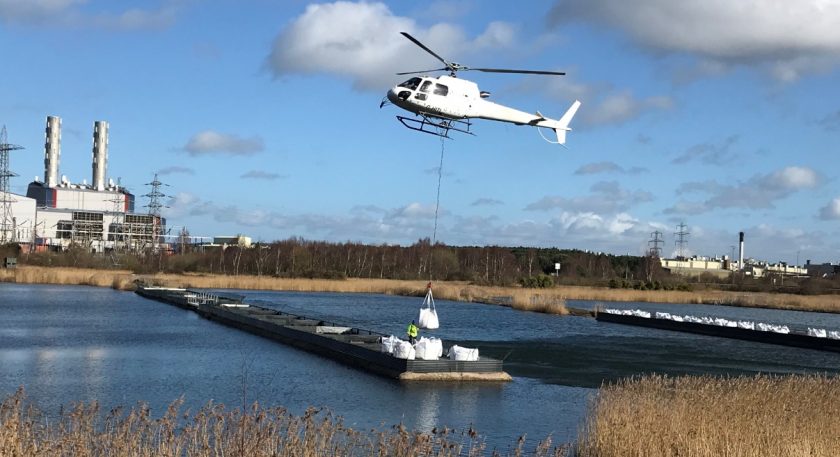 A helicopter is being used today to bring 130 tonnes of shingle to a nature reserve situated within the grounds of Tata Steel’s Shotton works.

The shingle being used to renovate safe nesting sites for the common tern which breed every year at the site.

The nature reserve at Tata is home to one of the UK’s biggest common tern colonies.

It is recognised nationally and internationally for the conservation of the common tern and is of Special Scientific Interest (SSSI) as well being a Special Protection Area (SPA) and a Ramsar site for its wildlife and landscape.

The project, which is being delivered in partnership with Natural Resources Wales and Welsh Government, aims to play a role to help preserve the site for the seabird and improve their habitat which will allow the species to continue to grow in numbers.

Exciting work is taking place at Tata Steel’s #Shotton Works today! 130 tonnes of shingle are being transported by helicopter and distributed to the tern nesting islands located on the site. Make sure to keep your eyes peeled for more updates throughout the day 👀… pic.twitter.com/wraUrVGGHT

Natural Resources Wales’ Senior Officer, Neil Smith said, “The Tata Steel Nature Reserve is a special site for the common tern and over the years we have worked alongside the owners of the site and Merseyside Ringing Group to help protect the local wildlife.”

“The delivery of stone will help provide the seabird with its natural breeding grounds, which are typically coasts with shingle beaches and rocky islands, but also rivers with shingle bars, or inland gravel pits and reservoirs.”

Peter Coffey, Merseyside Ringing Group added, “This colony started in 1970 when the Group pushed one small raft into the lagoons to see if common terns would nest; it was an immediate success.”

“There are now three nesting islands attracting 400 pairs of terns each year. The re-stoning project will help to sustain the colony for another 30 years or more.”

This year the site is also celebrating its 50th anniversary since work started to create the reserve.

The site, which was originally used as cooling lagoons for the blast furnaces at the Shotton industrial site along the Dee Estuary, has been restored over the years and has played a key role in the success of the common tern, as well as welcome other bird and wildlife species to thrive.

Neil Smith continued, “It has been a pleasure to play a role in the conservation of this reserve. Seeing the site develop over the years has been incredible, and to have such a site succeed so close to an industrial site can only be done through the commitment that has been shown by Tata Steel in collaboration with the Merseyside Ringing Group and volunteer groups.”