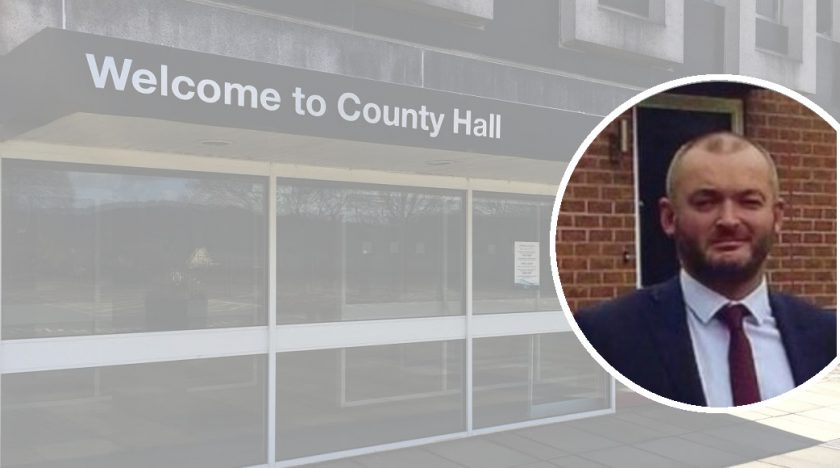 The former leader of Flintshire County Council has been suspended from the Labour Party, a Cardiff based newspaper reveals today.

The Public Service Ombudsman for Wales Launched an investigation into Mr Shotton’s conduct in June 2018 after revelations about the alleged affair appeared in the press.

Cllr Shotton, who represents Connah’s Quay Central ward, was found to have breached the code of conduct by an Adjudication Panel for Wales tribunal in January.

After a three-day hearing the panel decided the former Labour leader of Flintshire had left questions out for Mrs Selvester before her interview for the role of his PA in 2012.

Cllr Shotton was judged to have breached the code by ”sending and/or encouraging his PA to send inappropriate messages, to include messages of a sexual nature, during office hours”.

The panel heard the couple had used a council account to hire a car to take them to secret meetings in hotels, one of them in Manchester in February 2016.

However, the panel was not convinced Mr Shotton was aware the council was paying for the vehicles at the time and he was cleared of that allegation.

He was suspended from being a councillor for three months. 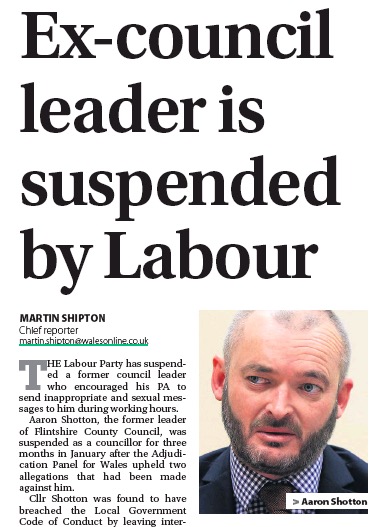 Cllr Shotton was absent from the monthly Alyn and Deeside Constituency Labour Party meeting on Friday, rumours then circulated that he had been suspended from the party.

In an article published today by *Cardiff based newspaper The Western Mail, chief reporter Martin Shipton quotes a ‘Welsh Labour source’ who said:

“Almost a month after the panel suspended Aaron for a serious breach of the code of conduct, we have finally seen action from the UK Labour Party.

It is disappointing that it has taken so long and that Welsh Labour have had nothing to say about someone being suspended for sending inappropriate and sexual messages during work time, when they have previously commented on cases where guilt had not even been established.

This is however a welcome development and UK Labour were right to suspend Aaron.”

Mr Shipton said Cllr Shotton has not responded to messages sent to him.

*The article has now been published online here: https://www.walesonline.co.uk/news/politics/aaron-shotton-labour-suspended-flintshire-17812131