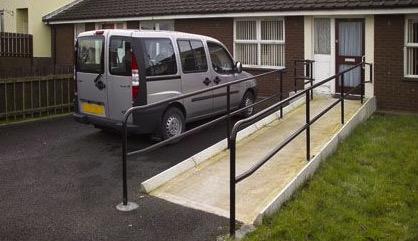 Politicians are set to receive an update on work being undertaken to address a backlog in home improvements for disabled residents in Flintshire.

The grants are used to help disabled people with the cost of adapting their homes and the aim is to let them live as independently as possible.

But during the 2018/19 financial year, some cases in the county were put on hold for as long as four months as a result of budget pressures.
The local authority has now said the backlog has largely been cleared.

In a report, Neal Cockerton, chief officer for housing and assets, said: “DFG work was suspended in Autumn 2017 due to budget pressures and the cases were put on hold until April 2018.

“This has had an impact on overall performance reporting for 2018/19 as some of those cases were on hold for as long as four months.

“This backlog of work has largely been completed, however, there are still a few cases ongoing due to the size and complexity of the adaptation required.

“The internal audit report was issued in May 2018 and concluded that an urgent system revision was required with key controls absent or rarely applied and, as a result, a limited assurance level was given.

“In order to ensure there was an adequate and urgent improvement to the delivery of the DFG an oversight board was established in July 2018.

“Since then work has been ongoing to address and implement the recommendations contained within the audit report and to review service delivery in order to make improvements.”

Mr Cockerton said the council had visited other local authorities, including Denbighshire, to learn from how they deliver the grants.

As a result, work has been carried out to make the process smoother to ensure residents are not asked for information several times over.

Staff have also been monitoring the performance of external contractors used to carry out the work.

The report will be considered by members of the community and enterprise overview and scrutiny committee next Wednesday.