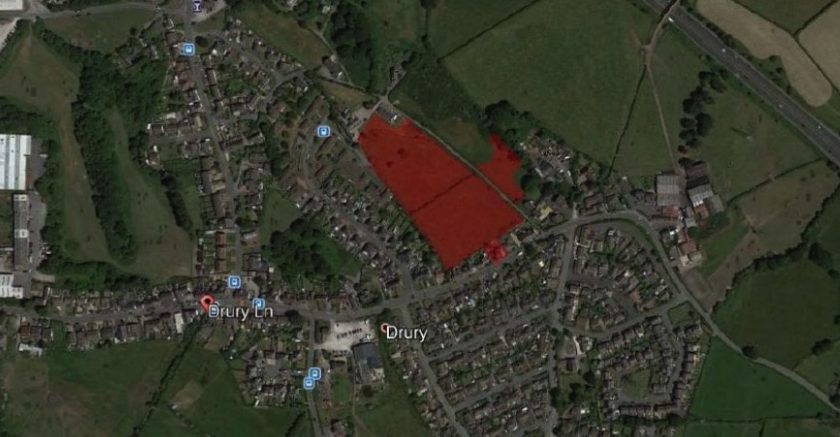 Developers have launched a bid to build almost 60 new homes in Flintshire despite being knocked back on three previous occasions.

Plans by Muller Property to demolish one house in Drury, near Buckley, and build 66 more nearby were refused most recently last month.

It came after residents raised concerns about the impact on local facilities, including Drury Primary School, where some pupils are being taught in portacabins.

However, the firm has now entered a slightly scaled back application for 56 properties in the same location.

In documents submitted to Flintshire Council, the builders claimed it would deliver a number of benefits for the area.

Representatives said: “It is proposed that 81 Drury Lane will be demolished and that a new access will be created to serve the housing development to be located to the north of the existing houses.

“The part of the site that is proposed to accommodate housing is roughly rectangular in shape and is surrounded by housing on three sides to the south, west and north.

“The council’s inability at the present time to be able to demonstrate a five year supply of deliverable housing sites is a significant material consideration which weighs in favour of the proposal.

“The proposed development will deliver a number of benefits including new market and affordable housing to help address the identified shortfall in supply.

“In light of the tangible benefits that the site will deliver to the local community and wider area, we respectfully seek the support of the council to the proposals through the grant of planning permission.”

The last proposals were rejected in October as residents raised concerns about the demolition of a property which has stood in the area for around 150 years.

Officers also said they should be turned down because of the impact on an area of green barrier land.

Their recommendation was backed by members of the local authority’s planning committee after they were told by one community member of issues with capacity at local schools and GP surgeries.

“On those occasions this proposal was dismissed by both planning and councillors unanimously, but it wasn’t just turned down unanimously, you were all very scathing in your remarks.

“Nothing at all has changed – the speeding traffic is still out of control, the school is still oversubscribed, you still struggle to get a doctors’ or dentists’ appointment and we still don’t have a shop or a post office.

“That’s why we as the residents of Drury have every confidence in your judgement that you’ll reach the same conclusion as you have on the past two occasions and refuse it 100 per cent.”

The latest application will be considered by the council at a later date.