Development of more than 80 homes in Buckley rejected 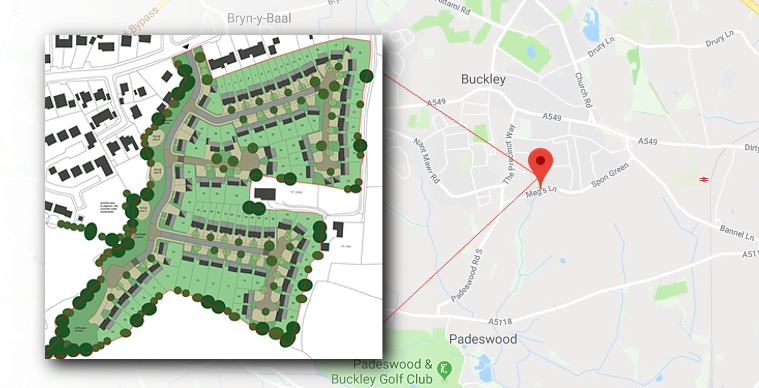 Plans to create more than 80 new homes in Buckley have been rejected amid fears the town’s facilities are at breaking point.

Politicians in Flintshire met this afternoon to discuss proposals to develop land to the south of Meg’s Lane.

Members of the community sent in more than 50 letters of objection detailing concerns that schools and doctors’ surgeries were struggling to cope with the growing population.

It was the second time an application for the site has been thrown out after permission for 100 properties was turned down last year.

He said: “I’m speaking on behalf of many anxious and concerned residents in Buckley and those from the immediate area of Meg’s Lane and Spon Green.

“Residents are very concerned as the site is green barrier land and the size and spread of this proposed development would result in loss of amenity, overshadowing and loss of privacy.

“The extra traffic this development would generate would cause further safety hazards onto Meg’s Lane, which is an uncategorised minor road.
“The lack of supportive infrastructure is a constant irritant in our community.

“This puts extreme pressure on schools, roads and healthcare systems.”

Committee members were advised by council officers that the development should be rejected.

They said there was insufficient information about the provision of affordable housing, public open space and necessary improvements to the nearby waste water treatment works.

However, a planning consultant acting on behalf of the developers said Flintshire’s lack of housing land was one of the main reasons why it should be approved.
David Forshaw said: “The application is acceptable on its own merits.

“Our visual assessment finds the development would have little impact.

“There is a need for the council to release green barrier sites to meet its five year housing land requirement, compliant with the council’s preferred strategy.

“It’s considered this proposal is the right development in the right place at the right time.”

Mr Forshaw said the developers had pledged to provide the required open space and allocation of affordable housing as part of the scheme.

He added that they were also willing to contribute towards improving the water works.

But Cllr Arnold Woolley (Ind), who represents the area, said allowing permission would set a precedent for other developments on green barrier land.

He said: “As far as this particular outline application is concerned, I believe it is an unwarranted and opportunistic attempt to penetrate land which is outside the proposed southern boundary line for Buckley.

“It also appears to me it is an attempt to wrongfully develop without any good and sufficient cause.

“There is also the issue of precedent that if this is granted it throws open to the door to the penetratation of the entire green barrier round from Ewloe to Mold.

“In representing the views expressed to me by many ward residents and for all of the planning reasons set out, I urge the committee to refuse this application.”

Councillors voted unanimously in favour of turning the plans down.