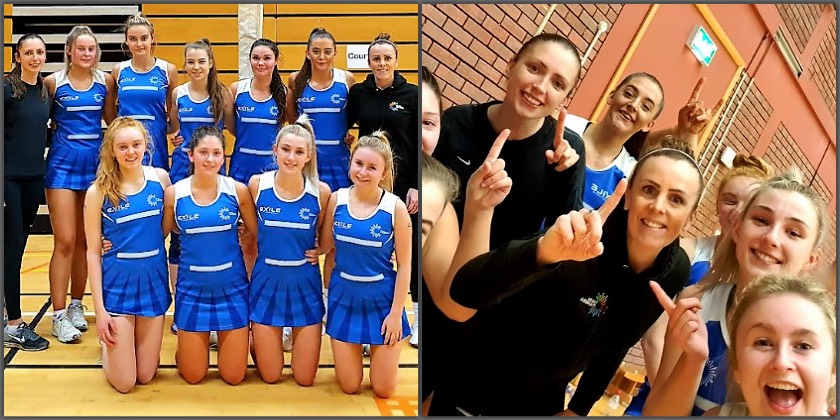 Stars of the show were the netball squad, who went one better than last year and won the final to be crowned champions.

Cambria Druids Football put up a good performance but were unable to reach the quarter finals in their section, while Nomads Cambria Football made it to the last eight.

The women’s football side also impressed on the day with an impressive run to the semi finals.

Coleg Cambria’s Director of Curriculum for Sport and Public Services, Sally Jones – who has herself represented Wales at netball – was delighted for all the students and Sports Lecturer Danielle Coxey, who helped lead the team to glory.

“Everyone who took part did Coleg Cambria proud,” said Sally.

“The standard was very high so for us to have made such progress is testament to the quality of our Elite Cambria programme and the students themselves, who are all dedicated and passionate about their respective sports.”

She added: “I am particularly thrilled for the netball team following the disappointment of last year when we sadly fell short in the final.

“To come back and win the tournament is a fantastic feeling; there’s no way we were going to let that happen again and their commitment has been rewarded – they’re now the Welsh champions and I’m incredibly proud of them.”

The netballers will now go on to represent Wales in the AoC (Association of Colleges) British Championships in Nottingham next year against the other home nations.

Several of the group to are expected to be called up to take part in trials for the Welsh Colleges squad, coached by Sally.

“Our sporting success in recent times has been incredible given a lot of our teams were only founded in the last year or two,” said Sally.

“As part of our Active Cambria initiative, Elite Cambria strives for excellence in sport, but also aims to improve health and wellbeing in students and our communities. We will continue to do so and thank everyone for their support.”

For more on the Elite Sport programme at Coleg Cambria, visit www.cambria.ac.uk/cambria–life/elite-sport or email sally.jones1@cambria.ac.uk

Welsh Colleges Sport (WCS), is the governing body for FE sport in Wales. Welsh FE colleges compete in WCS competitions across 20 sports as well as students from colleges representing WCS at international level in sports including football, rugby, hockey, cricket and netball.

WCS not only runs competitions but has the wider role of promoting sport, physical activity and volunteering in the further education sector. This activity is managed by Colegau Cymru in partnership with Sport Wales. Visit www.welshcollegessport.wales