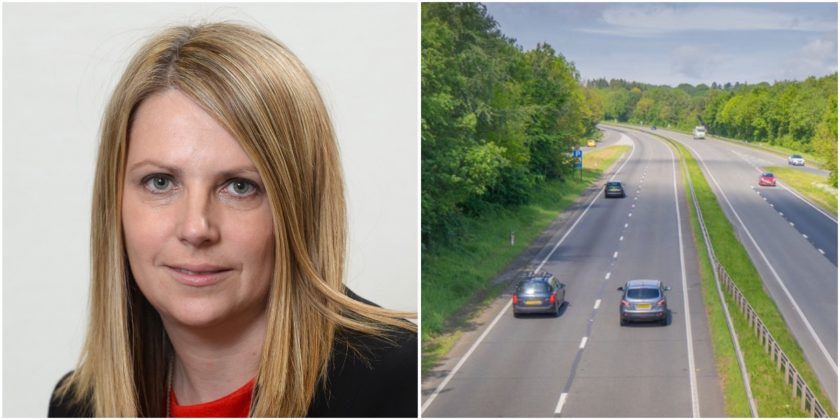 Delyn’s Senedd Member Hannah Blythyn has welcomed an announcement by the Welsh Government that it is to pause plans to build new roads.

Ministers want to study the impact that road traffic has on climate change and all proposed schemes will be reviewed by an expert panel.

In a Statement to the Senedd, Deputy Minister for Climate Change Lee Waters outlined that all current proposals for new roads across Wales would be reviewed by a new panel “to deem whether or not they were the most appropriate solution to the transport challenges they are designed to tackle.”

The Deputy Minister will also ask the panel to consider setting a series of tests for future proposals to build new roads, in line with Llwybr Newydd, the Welsh Government’s latest transport strategy.

Included in the list of proposals to be reviewed is the so-called Deeside “Red Route” which was originally proposed in 2017 to help deal with traffic problems on the A55, but has met opposition from a number of communities and organisations.

The scheme would see a new 13km two-lane dual carriageway linking the A55 at Northop with the A494 and A550 north of Deeside Parkway Junction via the Flintshire Bridge.

Ms Blythyn recently made a ‘firm commitment’ to oppose the proposals, she does not believe that they are the “most appropriate solutions” to the problems being faced in her Delyn constituency.

She has raised concerns about the proposals over the past few years and called on the Welsh Government to extend the consultation exercise wider to ensure Delyn constituents’ concerns were heard.

Speaking after the statement the Delyn MS said: “Since these proposals were first introduced I have worked with constituents to raise their concerns, and to push colleagues in the Welsh Government to consider more appropriate solutions to transport problems faced in our corner of the country.

Following the changes in transport patterns caused by the pandemic, the Welsh Government’s declaration of a climate emergency and the transport hierarchy introduced by Llwybr Newydd, it is only right that we take the opportunity to pause and reflect.

I will of course continue to listen to constituents’ concerns, and importantly their suggestions to solving the transport issues we face.

Earlier this year the Welsh government launched Llwybr Newydd: the Wales Transport Strategy 2021, which is aimed at shaping the transport system in Wales over the next 20 years.

It says, “emissions from surface transport must be roughly halved between 2020 and 2030 from 6 to 3 million tonnes Carbon Dioxide.”

“Whilst electric vehicles may provide the biggest emissions savings, this is unlikely to be the main source of savings until the late 2020s and possibly later. Therefore, we need to look at other measures.”

“Carbon savings from more people working remotely will help, and Wales has set a target of 30% of the workforce to work remotely on a regular basis.”

“Our priority on reducing demand will help achieve this. However, we also need to achieve mode shift with more people using public transport, walking and cycling.’

“Based on our current analysis, we have set a target of 45% of journeys to be made by public transport, walking and cycling by 2040.”

Ministers also want to shift money away from building new roads to maintaining existing routes and investing in public transport in order to incentivise people out of our cars.

Work on the £300m Deeside ‘Red Route’ was expected to begin in 2024 but the impact of the Covid pandemic and the long term changes in travel patterns should be fully assessed, a Senedd Petitions Committee said earlier this year.

A petition was raised in early 2019 by local residents in the Northop and Flint areas concerned about the impact on traffic around their communities and the poor consultation of the scheme, it attracted 1,500 signatures.

A committee – made up of cross-party Senedd members –  published a number of recommendations on the back of the petition.

It called for detailed design work on the scheme to be halted until the effects of the Covid-19 “both in terms of its affordability and due to the potential for there to be long-term changes to travel patterns and behaviour.”