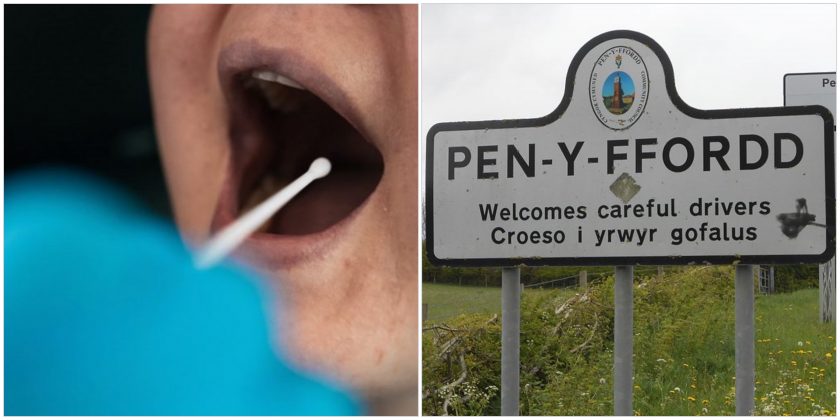 Update: Betsi Cadwaladr health board has said a new testing site will open in Penyffordd on Sunday 23 February.

The walk-in testing centre is located at Penyffordd Youth Club and Community Centre, Hawarden Road, Penyffordd, open 7 days a week from 9.30am until 4:30pm.

The testing facility is open to people who have symptoms of the virus, but will only be open to those with an appointment. An appointment for a test can be made by visiting the Welsh Government website or by phoning 119.

Earlier Report: Plans are¬† being worked on to open a third COVID-19 testing site in Flintshire.

Residents living in Penyffordd have spotted signs this week stating at ‘Temporary testing centre’ will be situated at the village youth club on Hawarden Road.

Penyffordd Community Council said it has been вАЬadvisedвАЭ the temporary testing site вАЬwill start on Sunday 21st February, we have also been advised it is being run by Betsi Cadwaladr.вАЭ According to a post on its Facebook page.

Community Councillors appear to have been kept in the dark about the new testing site.

Cllr David Walker posted on the council Facebook page: вАЬResidents like myself could be somewhat surprised to see the signs TEMPORAY (sic) TESTING CENTRE THE YOUTH CLUB.вАЭ

вАЬThe council were informed Wednesday [at] 2-15 [pm] despite the signs being in place at 8-30 on Wednesday.вАЭ

вАЬThe council have asked for the following information.

1.How long will the unit be there
2.Hours of opening
3.Do you need to book this has been answered by a new sign put up this morning stating you must book.вАЭ

Betsi Cadwaladr health board has told Deeside.com, вАЬwe are working on plans to open a mobile testing unit in Penyffordd, and will provide more information as soon as possible.вАЭ

Flintshire now has the highest COVID-19 incidence rate in Wales.

Cases per 100,000 population – based on the key seven day rolling rate metric – stood at 126 on Thursday, the highest in Wales.

Yesterday a further 43 people were reported to have tested positive for COVID-19 in Flintshire, again the highest number in Wales.

We are an ever growing, committed group of like minded individuals who are now approaching 450 members after only a monthрЯСМ We offer our personal free time to create improvement for our community and are taking action. Give it a try in your street / area it feels great рЯСН (LINK)

These inspiring female stories from Archives Wales are part of a grant funded project with Theatr Clwyd. The stories are based around real women discovered in the archive collections held at Ruthin and Hawarden. вЮ°пЄП (LINK) #PethauBychain #SmallThings #IWD21