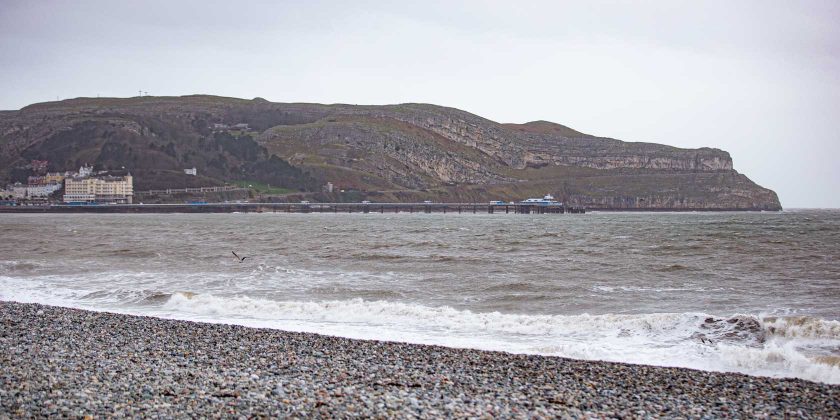 A council chief executive warned members “we will not be putting sand on the beach any time very soon” after a cabinet backed Llandudno’s new sea defence scheme.

Iwan Davies, CEO of Conwy county council, made the comment after the entire cabinet seemed to welcome plans to reintroduce sand to the seaside town’s North Shore beach.

The scheme, which will cost around £24m according to private consultants, would see cobbles removed from the beach area and sand and wooden groynes reintroduced to break up waves as a flood defence.

It has been difficult to find anyone outside of the county council’s environment, roads and facilities department who agreed with the strategy of piling rocks on the beach as a flood defence more than seven years ago.

After years of wrangling, proposals came before the authority’s economy and place scrutiny committee last week which outlined two proposals.
One was to keep the cobbles and build a higher sea wall, the other to reintroduce sand and use wooden groynes, with the latter overwhelmingly the preferred choice.

The decision was ratified by the council’s cabinet on Tuesday but not before Mr Davies had sounded a note of caution.

He said: “I might come across as a sandy beach grinch – I’m very happy to accept and understand the members’ desire for this to happen but we need to remember the funding for this scheme has not been secured.
“We will not be putting sand on the beach any time very soon because we need to develop the plan but also find that very significant amount of money.
“There’s a lot of work, persuasion, to be done before we go putting sand on the beach, which I agree would be a fabulous thing for Llandudno.”

The big obstacle now is to produce plans and a business case so Conwy county council can bid for a chunk of the £150m Coastal Risk Management Programme funding on offer from Welsh Government.

It’s estimated the council’s portion of the final bill for the work will be around £3.6m.

Responding to the idea putting sand back on the beach would help tourism, Cllr Julie Fallon (Deganwy ward) said: “It’s a no-brainer for me that it’s going to improve tourism.

“Over all the many consultations over the years I don’t think there’s been a person who has objected to this has there really?
“I look forward to when I can sit on the beach with my kids and think ‘we helped to make this happen’.”