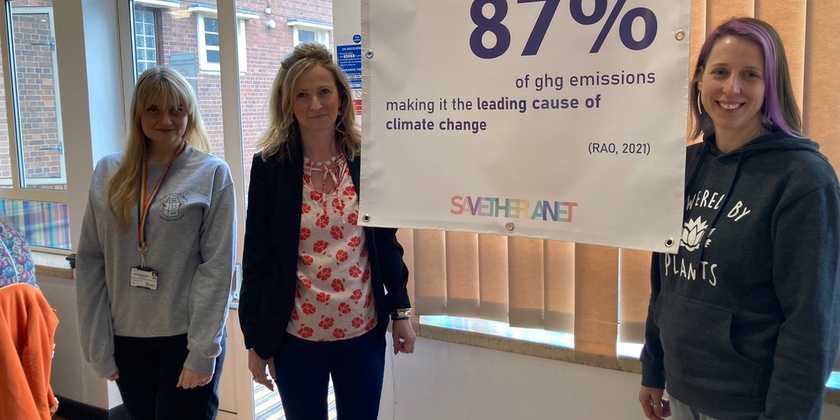 A special vegan lunch highlighting the benefits of a plant based diet has been held at Wrexham Glyndwr University.

Organised by members of the Criminology team, the on campus event was held as part of the university’s Go Green Week.

It was hosted by staff and students who are research active in the area of Green Criminology – giving diners the chance to try out some mouth-watering plant-based dishes.

They were also able to learn about why and how a plant-based diet can impact positively on human, animal and planetary health.

Caroline served as an expert witness in a landmark court case against the government over the banning of factory farming, led by the renowned Michael Mansfield QC. Although the judge did not agree to a judicial review into factory farming, an appeal is currently being taken forward.

Explaining how animal welfare/harm, climate change and Criminology are linked, Caroline said: “We look at the impact of animal agriculture from a criminological perspective.

“It is legal behaviour, but given the scale of the harm caused, we need to question whether is it a crime against humanity, animals, and through emissions – our environment?

“There can be no more important issue to talk about in current society than the transition to a plant-based diet – it is the most impactful thing that we can do, which will help prevent us progressing further into climate emergency.”

As well as the food on the menu, diners were able to learn more about the impact of animal agriculture and how to make the change to a plant-based diet.

Caroline added: “This was a great opportunity to highlight these issues, and the lunch was a chance for people to take a look around, see the banners, and read leaflets. It has really got people talking.

“We have had some wonderful feedback and it has been really good to see the restaurant full of people and to hear their opinions.

“A lot of people have said they are pleased to see the alternative vegan options available, and would like to see more.

“Some people are not ready or willing to change yet, but I am pleased that we have seen a great deal of interest from many who are and have been able to have to have this conversation.”


Tweets by Deesidedotcom
Wednesday May 25th 18:04