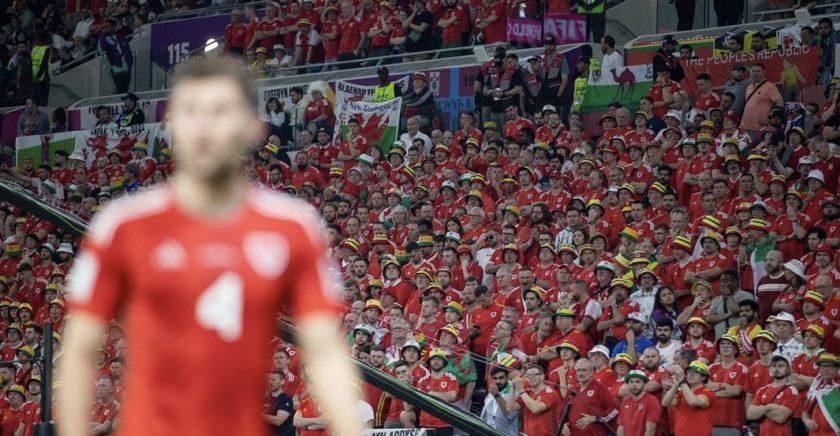 The official Wales song for the FIFA Men’s World Cup 2022 is “Yma o Hyd” (“Still here”), a protest song first released by Dafydd Iwan and Ar Lôg in 1983. Its unashamedly patriotic verses describe the adversity that Welsh people have endured over the centuries, including:

Byddwn yma hyd ddiwedd amser,
a bydd yr iaith Gymraeg yn fyw.
(We’ll be here until the end of time,
and the Welsh language will be alive.)

The Welsh government has a language strategy that aims to have a million people speaking Welsh by 2050. And it seems to be working: recently on TV channel S4C, 230,000 children from more than 1,000 schools across Wales sang “Yma o Hyd” together at the same time. They included children not only from Welsh-speaking households or so-called Welsh-speaking heartlands, but from across Wales.

The Welsh language, Cymraeg, has changed linguistically a lot over the centuries, which means the words, sounds and grammar used today are very different to 1,000 years ago. Welsh will continue to change – and if we want to see and hear a living Welsh language in the future, its grammar changing isn’t something that should worry us.

As “Yma o Hyd” suggests, Welsh has survived despite opposition. It is only in the past few decades that Welsh has regained a degree of social prestige, being now taught in schools across the country. Some of the children singing might not have even heard much Welsh had they been born a few generations ago. So the coming together of thousands of children singing in Welsh in 2022 is no small thing.

Welsh is a minority language, spoken by perhaps one-third of the Welsh population, having been stigmatised for many centuries. Stigma is the opposite of prestige, and in the case of Welsh it has been treated as subservient to English since at least the time of Henry VIII. English was for a long time considered the language of formality and officialdom, while Welsh was the language of the home and the street.

Language contact happens when speakers of different languages coexist in the same community – and, the longer the contact, the more intense and intertwined it becomes. Welsh has been in contact with English since the early middle ages, and although Welsh remained the language of most of Wales until the late 19th century, factors such as industrialisation and migration changed the demographics. Now every Welsh speaker also speaks English. They are what we call bilinguals or multilinguals.

When languages are socially in intense contact like this – and especially where bilingualism is common – we can see those languages influence each other linguistically. That means changes to the sounds, syntax or words. And a minority language will typically be affected more by a majority language’s grammar than vice versa.

An aspect of the influence of English on Welsh grammar that I study is how people use multiple languages in the same conversation. In linguistics, this is called code-switching. Here are two examples from the casual speech of Welsh-English bilinguals:

Code-switching is very common in the speech of Welsh people, although it’s associated more with speaking informally than formal speech. It’s also something that some Welsh speakers have a negative attitude towards. There is even a term, bratiaith (literally “ragged language”), which is sometimes used to describe code-switching, contrasted with “pure” Welsh speech that doesn’t contain English words.

My colleagues and I at Bangor University recorded conversations between Welsh-English bilingual participants and analysed their speech for code-switching. We found that, although switching was found in almost everyone’s speech, the grammar of the sentences that contained code-switching was almost always Welsh.

Welsh and English have different grammatical structures, such as the order in which words go in a sentence – like where an adjective goes when it is describing a noun. A speaker who inserts, say, an English adjective to modify a Welsh noun has to make a (perhaps unconscious) choice of whether to put that adjective before the noun, which would be the English pattern, or to put it after the noun and use the Welsh pattern.

Almost always, our participants used adjectives in keeping with the Welsh pattern, like the English word Egyptian modifying the Welsh word bethau (“things”) in this example:

‘CAUSE hwnna wnaeth atgoffa fi fod ‘na bethau EGYPTIAN yno.
(‘Cause that’s what reminded me that there are Egyptian things there.)

We found throughout our data that speakers stuck with Welsh grammar, despite inserting some words from English. And the majority of the words they spoke were Welsh. Put another way, even though code-switching is happening, they are still clearly speaking Welsh.

If the government’s ambition of a million Welsh speakers is to succeed, then we will need not just those people who speak “pure Welsh”, but people that speak Welsh however they wish – even if that means switching in and out of English while doing so.

The presenters and guests on the videos on the S4C-funded Youtube channel Hansh, aimed at a young adult audience, are a great example of people speaking Welsh and effortlessly switching between Welsh and English. This is now, for many, what colloquial Welsh sounds like, and research suggests that it’s no negative thing for the future of the language.

So if Dafydd Iwan is right, and Welsh will endure until the end of time, then it’s good to embrace the Welsh language today in all its many forms, however it is spoken.

This article is republished from The Conversation