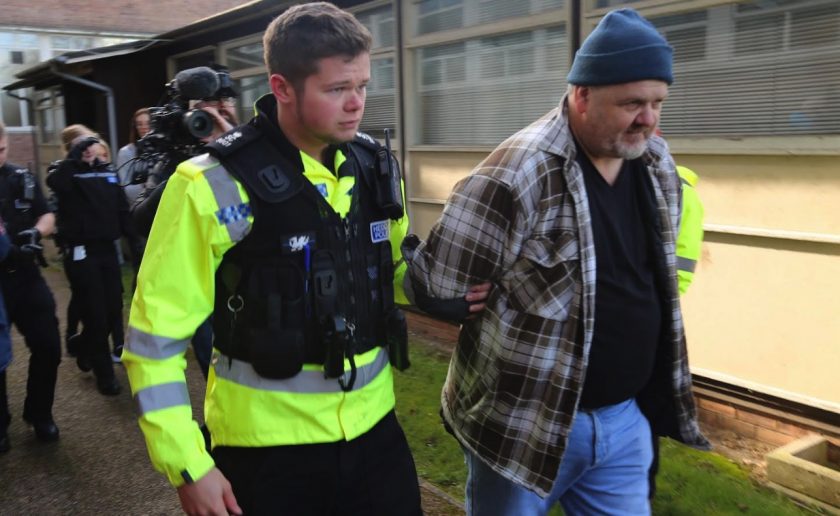 A high-profile Crime Scene Day learning simulation has been held for the second time at Wrexham Glyndwr University – drawing together students and lecturers from across the institution.

This year’s day followed a successful similar event in 2019 and saw a team of Theatre, Television and Performance students simulate an altercation at a badminton game in the university’s sports hall.

The altercation, witnessed by Psychology and Criminology students, quickly progressed in seriousness, with an onlooker apparently attacked with a mystery liquid – and a person abducted.

Policing Lecturer Andrew Crawford, one of the organisers of the event, said: “The idea behind our annual Crime Scene Day is that it gives students across a range of our courses the chance to test their skills in a fast-paced, realistic environment – with many getting the chance to collaborate with professionals in the careers corresponding to their degree. 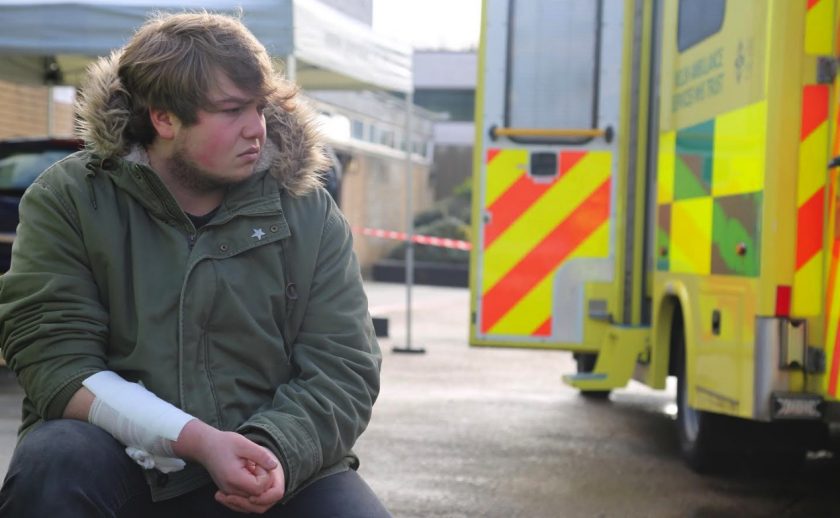 “We are very grateful to North Wales Police and the Welsh Ambulance Service for helping us today.  Their support makes the entire day more realistic for the students.”

As the staged incident progressed, Glyndwr’s security team called it in using a pre-prepared procedure – triggering an emergency services response to attend to casualties and to investigate the crime.

Working alongside the emergency services teams were students on the university’s Policing and Forensic Science courses, investigating the crimes and securing evidence.

As some of the ‘suspects’ escaped, they were involved in a car crash – which was staged on campus and contained a number of clues about the participants which Forensic Science students would later examine as part of the developing investigation. 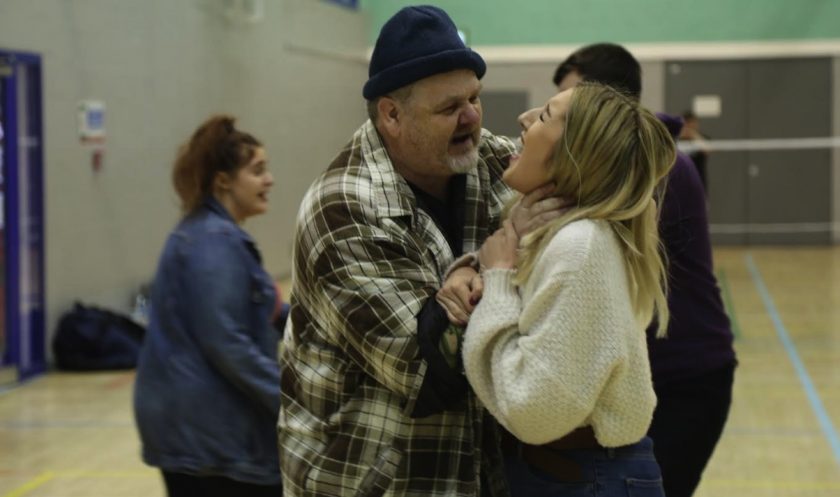 Forensic Science Programme leader Amy Rattenbury said: “As today’s incident progressed, our suspects left behind forensic evidence – and that evidence was examined by our students to help build up a picture of what had gone on.

“Students taking part in this part of the day were actually being formally assessed on their work as part of the event – making this perhaps one of the more interesting course assessments we have done here at the university!”

As Policing and Forensic Science students built up a picture of what had occurred, and briefed this back to a control room set up at the university’s Catrin Finch Centre, the action began to move towards the arrest of the suspects.

Two locations saw suspects arrested – with one occurring at the university’s Human Performance Lab, and another developing into a tense stand-off with a suspected hostage. As the scene was assessed, a trained police negotiator was called in to tackle the situation – now centred on Glyndwr’s dedicated crime scene investigation house. 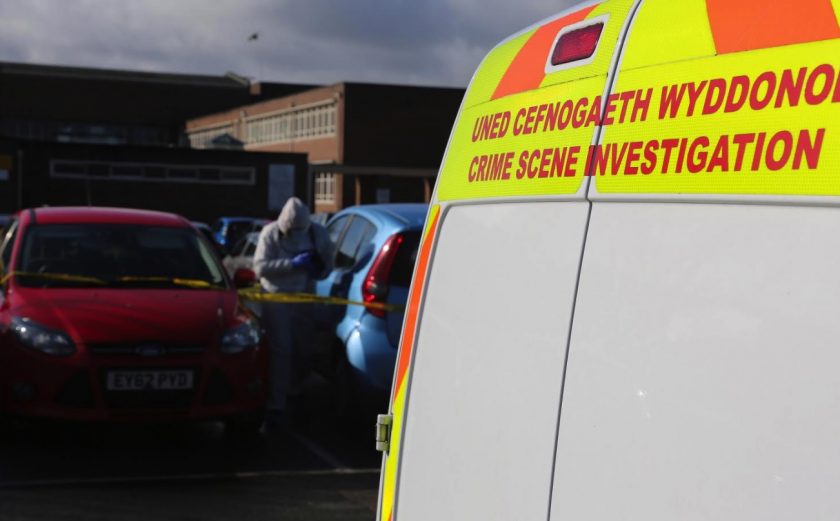 Following a tense standoff, the release of the abductee was negotiated – and the suspect was talked out of the house and arrested – before finally breaking character.

Theatre, Television and Performance Programme leader Elen Mai Nefydd said: “For our students, their work on applied practice, where they build up a situation following a brief from the policing lecturers, is crucial to success of the day.

“The event places a lot of demands upon the students but gives them the opportunity to learn the skills of live action role play.

“They have to react in character to fast-paced events and in uncomfortable or stressful situations, however their preparation paid off – and alongside their fellow students from Psychology, Criminology, Forensic Science and Policing, made for another successful Crime Scene Day.” 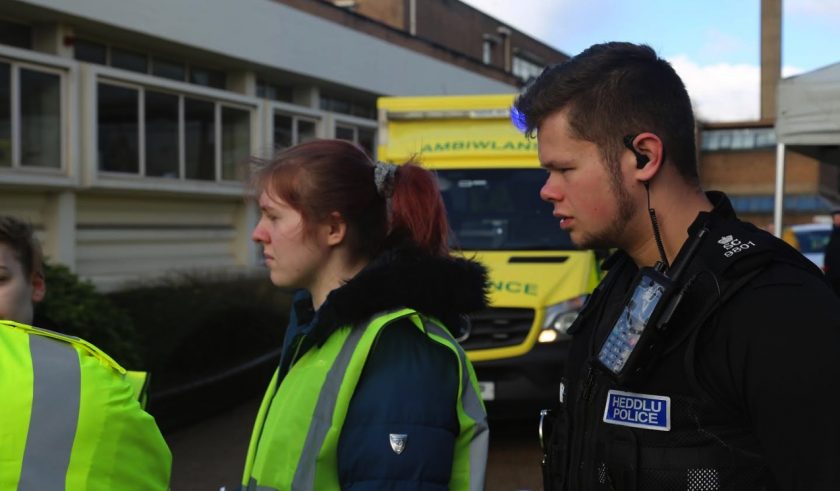 Lecturers involved in planning and running the Crime Scene Day will be among those taking part in Wrexham Glyndwr University’s first Open Day of 2020 this Saturday, February 29.

The event offers potential students the chance to find out more about the wide range of courses on offer at the university.

Coch Campus, visitors are able to see the university’s facilities, immerse themselves in subject-related activities and meet with course staff and current students.

There’s also an opportunity to ask all the important questions about applications, student funding and accommodation. 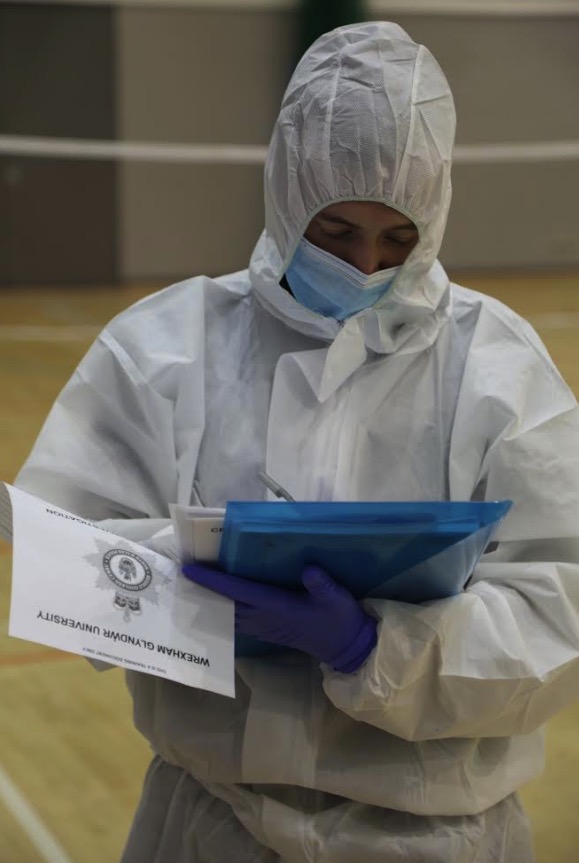 To find out more and register, visit: https://www.glyndwr.ac.uk/en/Howtoapply/VisitGlyndwrUniversity/OpenDays/UGOpenDays/