M56 back open following closure to recover a crashed HGV 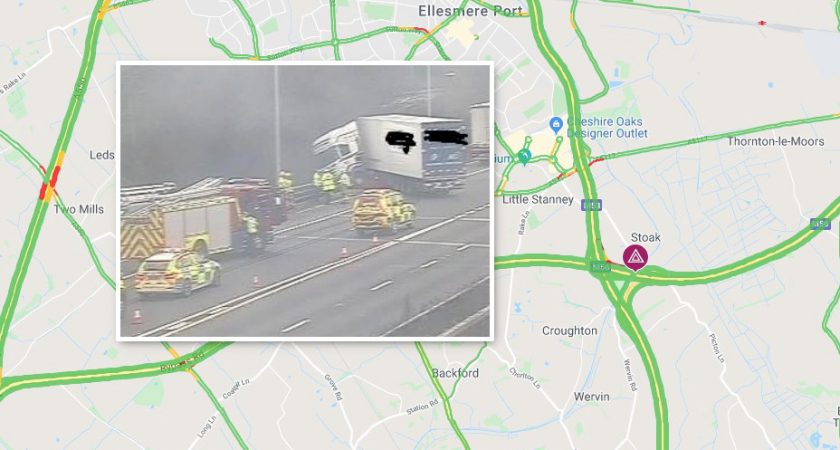 Update – 12pm: Highways England has said, The #M56 eastbound from J16 (Dunkirk) is now back OPEN, however the slip from the M53 southbound remains closed. 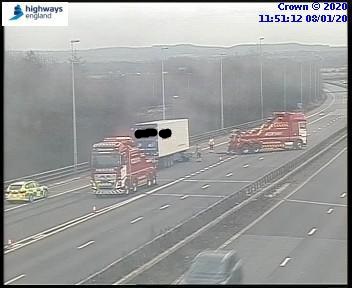 Update: Map shows the extent of the M56 E/B closure.

No indication as yet on how long it will be shut for while recovery of the jackknifed HGV takes place. 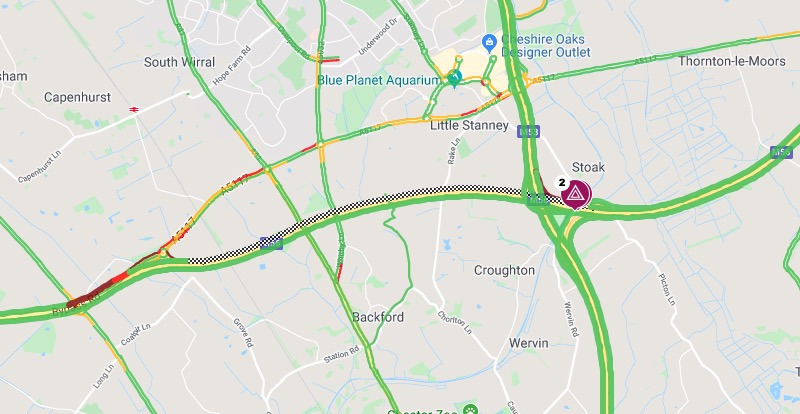 Update: Confirmation of that M56 closure – Latest traffic report [11.30am] states,  “All lanes stopped and stationary traffic due to recovery work on M56 Eastbound from A494 to J15 M53 J11. Traffic will be held while a lorry is recovered from the side of the road following an accident just after J15.”

Previous Report: Police have warned drivers that a section of the M56 in Cheshire will need to be closed to recover a lorry involved in a crash earlier this morning

The collision, involving two lorries took place on M53 Southbound at junction 11 where it joins the M56 at junction 15.

One of the HGV’s has hit a crash barrier and has come to rest hanging over  a bridge.

Police have said the eastbound carriageway at junction 15 – heading away from Deeside – will need to be closed to allow a ‘heavy wrecker’ to recover the lorry from the bridge.

J15 M56 EB The jack knifed lorry will need to be recovered by heavy wrecker from the bridge. This will require a full closure of the M56 EB at J15 while this is taking place. We will update when this is about to happen.

“The M56 in Cheshire is closed eastbound between J16/A494 (near Ellesmere Port) and J15 (near Helsby) due to a collision involving an HGV which has collided through a crash barrier and come to rest overhanging from a bridge.

All emergency services including North West Motorway Police Group have been in attendance.

As a result of this incident, there is also no access to the M56 eastbound from the M53 southbound.

Exit the M56 at J16 and take the first exit at the roundabout onto the A5117 eastbound.

Continue until the roundabout with the M53 at J10 and take the M53 southbound until J12.

Use the roundabout to turn and join the M53 northbound, and then merge onto the M56 eastbound at J15.

Please allow extra time for your journey should you be travelling in the area.”