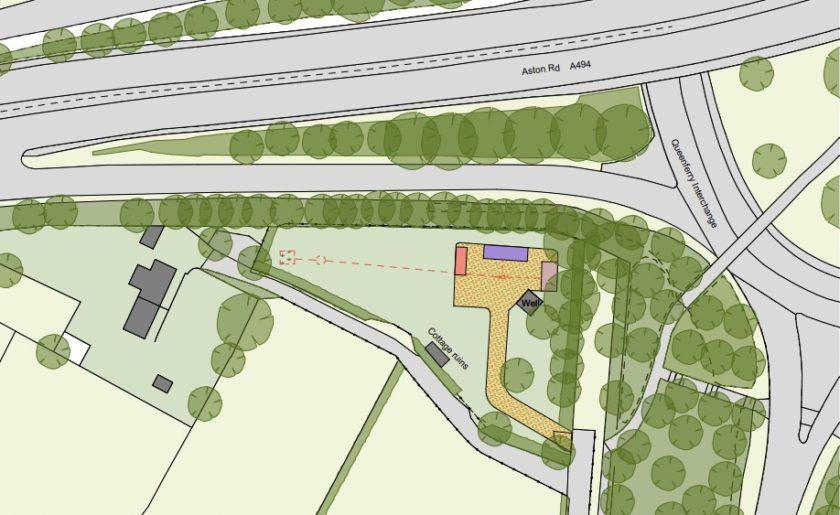 Plans for a Traveller site in Deeside have been refused by councillors due to concerns over the development being in the open countryside.

During Tuesday’s Flintshire Council’s planning committee, a change of use application was considered for land at Gladstone Way to station a single static caravan for residential purposes, together with the addition of hardstanding and a utility/day room.

The site is on the western side of Gladstone way, close to the A494 Queensferry interchange, with the site being accessed by a lane off Gladstone Way.

There have been objections to the application raised by Hawarden Community Council, and Hawarden Aston Cllr Helen Brown, with both commenting that the site is within the green barrier.

In addition, there have been 15 letters of objection from the public, citing concerns ranging from the impact on a public footpath to local services. There has also been a letter of support, stating it represents needed provision for Gypsy and Traveller sites in the area.

However, the scheme was rejected by the majority of councillors on the local authority’s planning committee after community leaders raised objections.

Hawarden, Aston Ward councillor Gillian Brockley said in a pre-submitted statement, “during a site visit earlier this week, it was stated that the land itself is green barrier land and there were no ecology or wildlife reports for the land.”

“There was also no information available about the pollution levels given that the proposed site sits adjacent to the A494 and the extremely busy roundabout.”

Cllr Brockley said: “It is said there is a local need to be met for this application, but the family question is not from the area and will be moving to be near a family in Sandycroft.”

“This begs the question, is there room to extend the Sandycroft site for one static and one tourer (caravan) given the fact that the site is a well-established site with all amenities already in place and available?”

She said: ‘We should not allow building on green barrier land, we have brown sites that can be utilised.”

“Hawarden is a rural established community and there and that should be taken into consideration with this proposed allocation.” Cllr Brockley added.

Speaking on behalf of the applicant, Nathaniel Green from Green Planning Studio accepted the site sits within the green barrier “but it is accepted by (Flintshire council) officers this is well designed single pitch development that will not over dominate the nearby area.”

He said: “The site is adjacent to a heavily urbanised area and is highly sustainable in terms of access to facilities. The adjacent footway allows easy access to a major supermarket on the other side of Gladstone way as a large mobile home park showing that this kind of development is in character with the wider area.”

Connah’s Quay Central Cllr Bernie Attridge said “With this kind of a development in our green barrier, I think the planning committee has to resist.”

“We have clear policy grounds for refusal, this site is within the green barrier and outside of the settlement boundary.” He said.

Cllr Helen Brown said she would have liked to have seen ecology reports for the site which sits close to the A494.

She said:  “This is quite a notorious stretch of road all the way up to Ewloe for air quality.”

“My concerns are also about the green barrier in the open countryside, I really would have liked to have seen the ecology report. It’s okay saying that they’ve been done, but we’ve not seen them.”

Mold East Cllr Chris Bithell said, “the fact the site was in green barrier does not have itself give rise to refusal. I’m not altogether happy with that for obvious reasons, because nobody would actually develop in the green barrier.”

“But as far as Gypsies and Travellers are concerned, there’s a different attitude and there is a different position taken with these applications.”

Cllr Bithell said the applicant cannot “be direct to other council sites such as Queensbury, because that is not something that we can do in these circumstances.”

“I do feel the frustration that other members feel regarding this but those are the realities of the situation.”

“They are given particular rights and privileges which others don’t enjoy in that particular respect and actually building the green barrier is one of them.”

The proposals were refused by ten votes to three at the end of the debate.