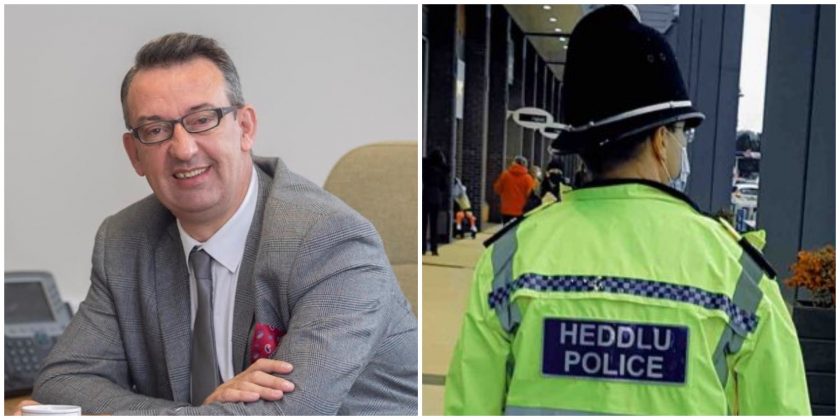 The region’s newly-elected police and crime commissioner has pledged to put more ‘bobbies on the beat’ in North Wales.

Andy Dunbobbin says he will increase the number of officers and staff during his three-year term of office.

He also promised to improve the technology at their disposal so police officers could spend more time out and about in communities across North Wales, rather than having to return to their police stations to complete form filling or search for information.

Mr Dunbobbin gave the assurance in his first Police and Crime Plan which sets out the overall strategy for policing North Wales that Chief Constable Carl Foulkes will have to implement.

The plan will be presented to a meeting of the North Wales Police and Crime Panel next Monday (September 20).

The  priorities contained in the commissioner’s new blueprint include:

In drawing up the plan, the commissioner says he has consulted widely  and listened to what the public want.

According to Mr Dunbobbin, one frequent complaint made to him during his election campaign was that residents didn’t see any police officers in their communities any more.

He said: “I will work hard to improve the efficiency and effectiveness of police officers and staff.

“The number one priority for communities is to improve visible policing – providing reassurance, gathering intelligence and disrupting criminal activity.

“Local Neighbourhood Policing Teams (NPTs) provide the visibility and reassurance but are also widely regarded as being an invaluable source of intelligence to tackle the most serious and organised criminality.

“The work of our Regional Organised Crime Unit (ROCU) and the Wales Extremism and Counter Terrorism Unit (WECTU) relies heavily on the local intelligence NPTs provide.  Neighbourhood policing is the bedrock of this Plan.

“In order to tackle issues ranging from drug dealing in our towns to rural crime on our farms, it’s imperative that all our North Wales communities have positive relationships and experiences with their local police, helping break down existing barriers and empowering residents to have their say on where we as a service should be focusing our efforts.

“In addition to increasing the number of officers in our communities, I am also committed to working with the Chief Constable in improving the digital support available to our current officers and staff thereby increasing the amount of time they spend in the community.”

Improving road safety was a key area for Mr Dunbobbin who wants to reduce the number of people killed or being seriously injured.

He says there will be a tough approach towards dangerous or careless driving which would not be tolerated.

Tackling and preventing domestic abuse and sexual violence was also a major priority and Mr Dunbobbin pledged to make North Wales a “hostile environment” for perpetrators.

At the same time, far too many women were being sent to prison with devastating consequences for their families, particularly their children, so Mr Dunbobbin will be spearheading the development of a new female offender strategy.

Among the innovations Mr Dunbobbin wants to introduce is a victims’ panel so that people who have suffered crimes against them can be heard and given the support they need.

Reducing reoffending meant there would be fewer victims so Mr Dunbobbin is keen on addressing the root cause of offending and strengthening rehabilitation measures.

With that in mind, he will continue to fund the pioneering Checkpoint Cymru programme to divert low-level offenders away from committing crimes as well as supporting other innovative crime prevention and rehabilitation project in North Wales.

Coming from a background in the technology sector, the commissioner was acutely aware that scams and online attacks now account for almost half of all offences.

As well masterminding the fight against cybercrime in North Wales, Mr Dunbobbin will be playing a leading UK role after the Association of Police and Crime Commissioners elected him as their deputy lead for police technology and digital and deputy lead for economic and cybercrime, including fraud.

He said: “It is vital that the police services’ approach to cybercrime is well co-ordinated and effective in providing a quality service for the people of North Wales.

“Cybercrime offences are still hugely under-reported nationally and we will work to build the confidence of people and businesses within North Wales to report these crimes.”