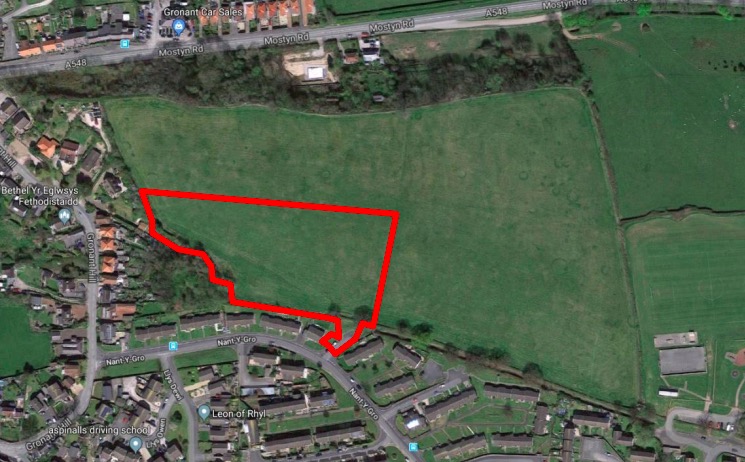 Plans to build a large affordable housing development in a border village look set to go ahead despite fierce objections.

Wates Residential has applied for permission for a total of 33 homes and eight flats on land at Nant Y Gro, Gronant.

It forms part of proposals to create almost 100 new affordable and social homes in the county as part of Flintshire Council’s strategic housing and regeneration (SHARP) programme.

In total 57 letters have been received objecting to the new houses raising fears about the village’s limited infrastructure, along with two from MPs.

However, the authority’s planning chief Andy Farrow has recommended that the plans are approved.

In a report set to go before planning committee members next week, he said: “In regard to this development, there is genuine need for the types of social rented housing proposed.

“Furthermore there are no alternative sites in this location, the narrow strip of land is a logical extension to the allocated site, the scale and design of housing proposed is sympathetic and will remain affordable in perpetuity.

“The principle of the proposed development is therefore acceptable.

The proposal included a traffic assessment which has been considered by the highway development control manager who has no objections based on the level of development proposed.”

In total the council wants to create 92 social and affordable homes at three sites, including Nant y Gro, the former council depot in Dobshill and Llys Dewi in Penyffordd near Holywell.

Among the objectors to the Gronant proposals were members of Llanasa Community Council, who said the existing infrastructure in the village was insufficient to meet the needs of an additional 40 plus families.

They added that no account had been taken of the impact on local health services.

In response Mr Farrow said: “Objections have been received with regard to insufficient local facilities to serve the development.

“There has been no evidence submitted to demonstrate that there is a lack of community facilities or services and therefore this matter can be given very little weight in the overall planning balance.”

The plans are set to discussed by members of Flintshire Council’s planning committee on Wednesday.