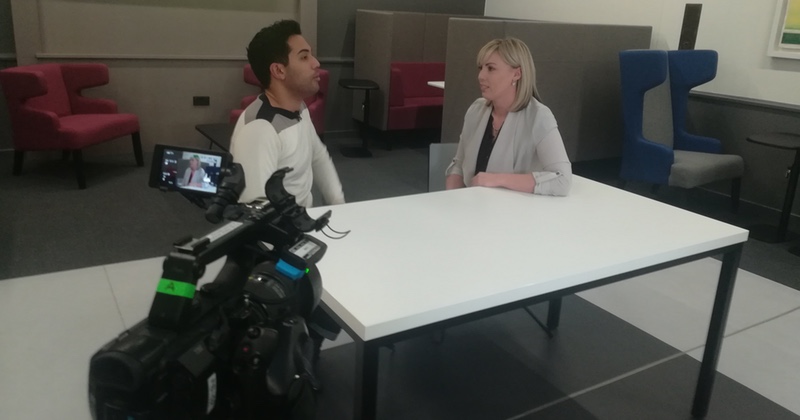 A cyber security researcher from Wrexham Glyndwr University has lent her expertise to a documentary team from BBC One Wales’ popular consumer affairs programme X-Ray.

Leanne Davies, who specialises in insider threat and open source intelligence, along with Dr Nigel Houlden, lecturer in networking and security, were approached by the team to see if they could find out more about the trading of personal details via sites on what is known as the ‘dark web’.

The creation of this documentary follows an incident involving an individual from Flintshire who found an account he used to make purchases online had been hacked and that his personal details had then been used by the attacker(s) to make online purchases.

Initially, Nigel and Leanne spoke to the team about cyber security issues and some of the ways in which individuals and businesses can be targeted as the programme was developed.

In order to illustrate this, with the consent of the individual whose details had been compromised, Leanne carried out research using Open Source Intelligence (OSINT) techniques, which allows for the collection of data that is freely available online including within the Dark Web, to find out whether any of the individual’s personal data and, more importantly, login details were available online.

Leanne, who is also an organiser for the North Wales Cyber Cluster and Head of the Capture the Flag (CTF) Cluster due to launch in December 2019, said: “There is a growing awareness of cyber security among the public, with a steady stream of headline news about the latest breaches in security and loss of personal data, as being something which is not only an issue for big companies and nation states but also the individuals whose data is involved in those breaches.

“Being aware of cybersecurity isn’t just something which major organisations and service providers need stay on top of, we can all make sure that we practice a few simple steps when we are online to keep our information safe.

“Much of this is easy to do, such as: Check links are what they say they are. It is a simple thing to make the text appearing in an email say one thing and have the link when you click on it take you somewhere else.

“If in doubt, type the address into your web browser address bar instead of clicking the link.

“Making sure your computer, tablet or smartphone are never left unlocked and unattended.

“It was great to work with the X-Ray team, both to help the individual in this particular case get some answers and to help raise awareness of cyber security issues and some of the things we can all do to make ourselves safer online.”

Further details about Wrexham Glyndwr University’s BSc (Hons) in Cyber Security (which can also be studied as a degree apprenticeship) can be seen here.