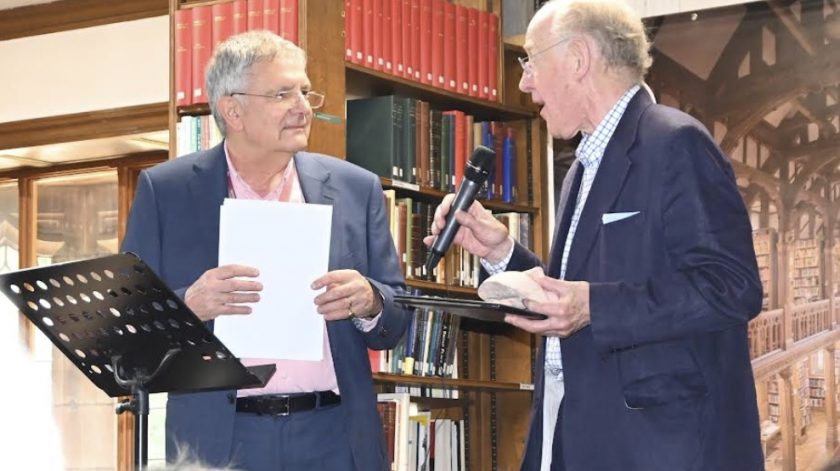 A supporter of a unique Flintshire library has been honoured with a fellowship.

Peter Francis, Warden of Gladstone’s Library in Hawarden, presented Arthur Burgess with a fellowship at the Library’s Founder’s Day event on July 5.


Born in Dublin in 1940, Arthur Burgess grew up in an Irish Anglican family as the eldest of three siblings. He described his childhood and youth as taking place within “a rather cloistered environment”; although his family and community experienced no hostility within the majority Catholic Republic.

He studied Physics at Trinity College Dublin before moving to England and working in industry for companies such as Shell and British Gas. He retired in 1999 and came across Gladstone’s Library in 2002.

There, he said he discovered an environment that could have been designed for him, where discussions of faith occurred without judgement, and where he found both like-minded people and friendly debate. Over two decades, he has been a regular attendee of courses and lectures, as well as a staunch supporter of the broader organisation.

He said, “I was interested in a course or lecture held by Jack (John Shelby) Spong, as I was familiar with his work, and it was full. Then, on the Friday before the course started, I was called because there was a cancellation and I was there like a shot.

“When I went to the Library, I fell in love with it instantly. Weeks after I came home from the course, my wife said, ‘will you ever shut up about that Library?’.

“Well, I’ve been visiting for 20 years – and my wife learned to love the place too.

Mr Burgess quipped that he thought the fellowship was “basically for good attendance” but added, “Peter and the Library have been kind to me over the years, and both are near my heart, so I am very delighted and a little embarrassed to be offered a fellowship.

He said: “Arthur has been coming here religiously since 2002 and he’s become a valued friend of the Library. He has supported the library unstintingly throughout his association with us. His support for an open theology has been reliable and generous.” ‌﻿​﻿‌﻿‌﻿‌﻿​﻿‌﻿‌﻿‍﻿‌﻿​﻿‌﻿‌﻿‌﻿​﻿‌﻿​﻿‍﻿‌﻿​﻿‌﻿‌﻿‌﻿​﻿‌﻿​