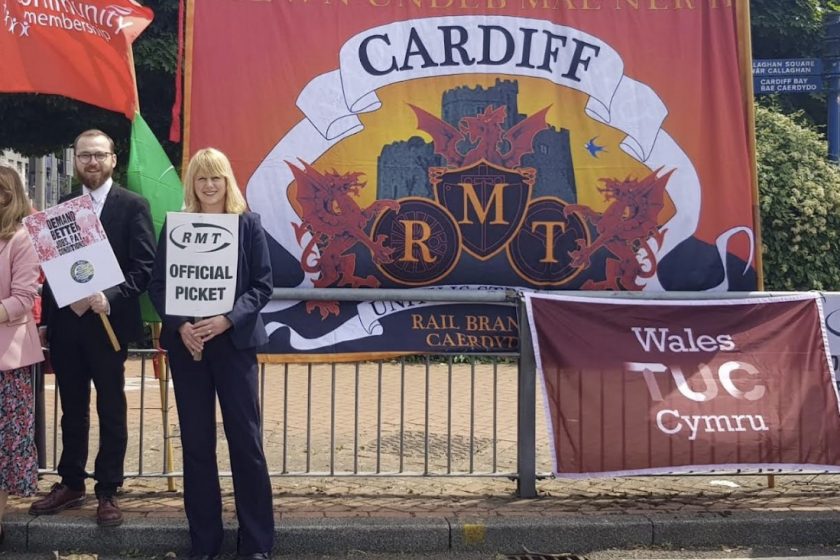 Railway stations across Wales have been deserted today as the biggest wave of rail strikes for 30 years got underway.

The National Union of Rail, Maritime and Transport Workers (RMT) are staging three days of action with around 40,000 staff at Network Rail and 13 train operators walking out today, further walkouts are planned for Thursday and Saturday.

Each strike will last 24 hours. However, train operators have warned that knock-on effects mean disruption on either side of the strike days.

Two Flintshire-based Members of the Senedd Carolyn Thomas and Jack Sargeant have called for a united workers front in the fight against the cost-of-living crisis as they joined an RMT picket line in Cardiff.

The rail sector is currently facing its biggest strike action in thirty years as rail workers walk out in a dispute over below-inflation wage rises and threats of redundancies. According to Network Rail, fewer than 10% of normal services will run over the first three days of industrial action in the UK.

Carolyn Thomas, Member of the Senedd for North Wales, who joined striking workers and trade unionists on a picket line at Cardiff station said strike action “has been made inevitable by the utter intransigence of the UK Government to the demands of working people.”

“They never demand landlords hold their rents below inflation, or for bankers to hold their bonuses below inflation. It is always working people that are targeted. People have had enough and I stand with them in their fight for decent pay and working conditions.”

Jack Sargeant, Member of the Senedd for North Wales, also joined the picket line in Cardiff. He said, “As a proud trade union member, RMT members on strike have my full support and solidarity.”

“Rather than playing workers off against each other, the UK Government must learn from Mark Drakeford’s leadership and get back round the table to negotiate a deal that will support workers who are seeking to protect their industry and their livelihoods.”

Last ditch talks failed to resolve the dispute over pay, jobs and conditions with the RMT union blaming the UK Government for the lack of progress.

Commenting on the strike action, Welsh Conservatives and Shadow Transport Minister, Natasha Asghar MS said:“Whilst I support workers’ right to strike, this rail walkout is set to cause huge disruption not just across Wales but the rest of the UK.

“Without a doubt the railway forms essential connectivity for people up and down the country, and therefore I hope that the unions can abandon the working practices of the 1950s,  get round the table and use the changes in practices to give the staff a pay rise.

“The disruption caused by these strikes emphasises the need for the railways to bring in minimum service requirements which would insulate networks from complete shutdown and minimise disruption to people’s lives.

“In the meantime, it is absolutely paramount that Transport for Wales pulls out all the stops to put on alternatives in a bid to minimise disruption to people across Wales.”