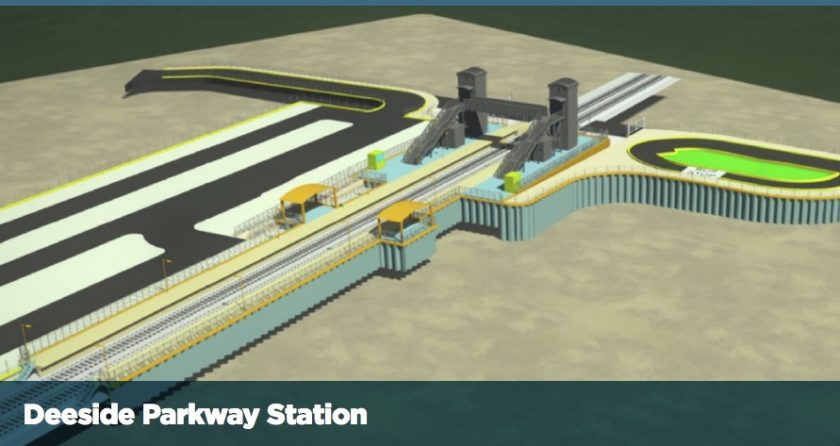 Flintshire Council has submitted what its leader has called a “superb” Levelling Up Fund (LUF) bid after a previous one was rejected by the UK Government.

The council is seeking £36 million for investment in the Borderlands railway line which links north east Wales to the Wirral.

The aim of the fund, if successful, will be to accelerate progress towards higher frequency, faster and more reliable rail services on the Borderlands Line that its hoped will attract more passengers.

Flintshire Council – with the support from other local authorities and business organisations in the cross-border Growth Track 360 alliance – submitted an initial bid for LUF funding for the Borderlands line in June 2021, but it was rejected.

“Learning from UK Government feedback on this bid and now with extensive work by Transport for Wales and detailed input from Liverpool City Region Combined Authority, expectations are high of a positive response to the Round 2 application.” A spokesperson for the Growth Track 360 alliance said.

Did Rishi Sunak funnel money away from areas like Deeside?

Last week Alyn and Deeside MS Jack Sargeant reacted angrily to footage of former Chancellor and leadership candidate Rishi Sunak admitting he was instrumental in funnelling money from communities like Alyn and Deeside to fund projects in the wealthiest parts of the UK.

The revelation followed the announcement that Flintshire would receive no funding for its Round 1 LUF bid, “in stark contrast to places like Sussex and Kent.” Jack said.

He has called for a full investigation “into the circumstances around the refusal to fund (first LUF application) any levelling up bids in our community and only one in the whole of North Wales when wealthy communities have done so well.”

If the second bid attempt is successful two investment schemes are proposed one being a new Deeside Industrial Park railway station.

The ‘flagship’ station will have a large 200+ space car park, bus interchange and active travel. facilities. 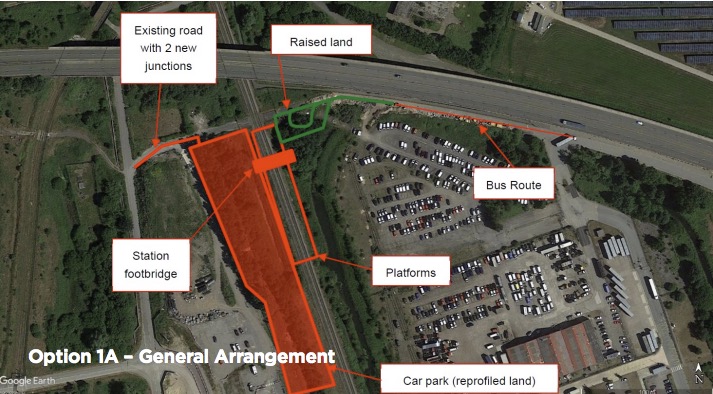 Location of the proposed Deeside Parkway Station within the industrial estate.

The other proposal is at Padeswood Hanson Cement works where new sidings and improved access arrangements from the main line are desperately needed to eliminate competition for track capacity between passenger and freight trains.

As part of the £50m North Wales Metro programme to “transform rail, bus and active travel services” across the region,  the Welsh Government originally committed to increasing the number of trains on the Borderlands Line to two per hour from May 2022.

GB Railfreight (GBRf) – which operates freight trains into Padeswood Cement works – formally objected to the additional passenger trains on the Borderlands Line as they would conflict with daytime freight traffic.

GBRf says freight traffic has to run at set times during the day and “blocks the northbound line between Penyffordd and Buckley for the best part of an hour due to the need to shunt in order to split trains going into the short sidings and combine them coming out.”

The introduction of two trains per hour on the Wrexham-Bidston route is dependent on an Office of Rail and Road’s adjudication.

A park and ride scheme at Penyffordd station was proposed in the first LUF bid, it has now been ditched for the second bid attempt.

Christian Wolmar visited the line as the guest of cross-border rail campaign Growth Track 360 in October 2021 and wrote about his experiences in his RAIL magazine column.

In his letter of support for the LUF Round 2 bid, Mr Wolmar says that during his visit he “was struck by the strength of the improvements that were being proposed…..to this excellent but underused railway line”.

A GBRf operated cement train arrives for loading at Padeswood

The new bid contains formal priority letters of support from a host of local Westminster Members of Parliament and Senned Members, businesses, rail trade and user associations, and local authority leaders from across the region.

Growth Track 360 Chair, Councillor Louise Gittins, Leader of Cheshire West & Chester Council, said: “Improvements to the Borderlands railway will support the UK and Welsh Governments’ shared desire to tackle climate change with alternatives to the car by seamlessly connecting Liverpool City Region and Cheshire with the future North Wales Metro, providing our citizens with access to a wide range of job opportunities, skills training, educational and leisure facilities regardless of which side of the Wales-England border they live.”

Growth Track 360 Vice Chair and Leader of Flintshire Council, Councillor Ian Roberts, said: “Flintshire, Growth Track 360 and our supporters learned a great deal from our first application to the UK Levelling Up Fund for the Borderlands railway. ”

“With great support from Transport for Wales, Liverpool City Region Combined Authority and the private sector, we have now produced a superb bid for Round 2 which, if approved by the UK Government, will accelerate the transformation of the Wrexham-Liverpool line and assist in unleashing the full economic potential of our cross-border region.”