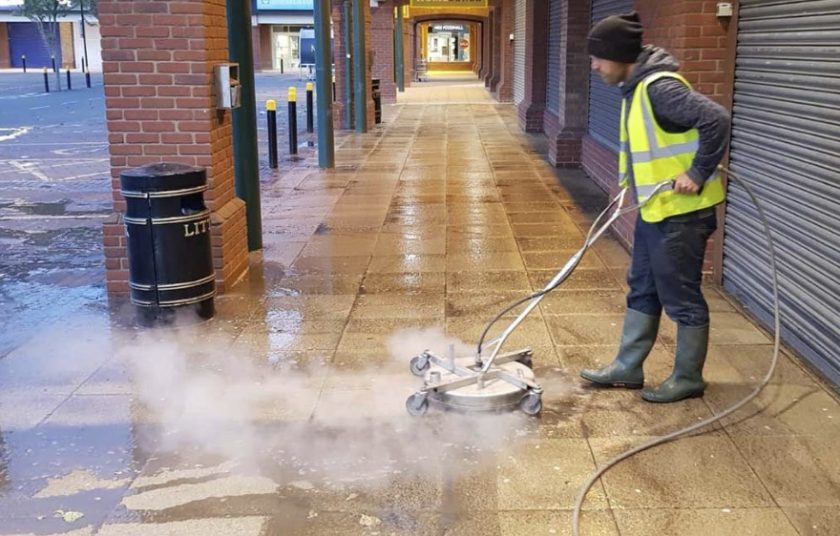 Flintshire Council is one of five local authorities in Wales to share £1.85m of funding aimed at tackling chewing gum staining.

As well as Flintshire, Denbighshire, Blaenau Gwent, Newport and Swansea will receive funding from the Chewing Gum Taskforce Grant Scheme to help them clean gum off pavements in their local area this summer and to invest in ‘long-term behaviour change’ to help prevent the issue in future.

Chewing gum litter wastes millions of pounds of taxpayers’ money every year; the annual clean-up cost across the UK is estimated at £7 million.

Created last year by the UK Government and working together with Welsh Government, Scottish Government and the Northern Ireland Executive, the Chewing Gum Taskforce brings together the country’s major chewing gum producers, including Mars Wrigley, GlaxoSmithKline and Perfetti Van Melle, in a new partnership to remove gum litter from UK high streets.

Under the scheme, administered by independent environmental charity Keep Britain Tidy, the chewing gum firms will invest up to £10m over five years.

More than 45 grants will be awarded this year across the UK and six of these will be used to fund innovative projects that encourage long-term behaviour change.

Deputy Climate Change Minister Lee Waters said: “The need to get rid of chewing gum immediately after use means it is an item commonly disposed of irresponsibly, with gum staining present on more than two thirds of Wales’ streets.

“Cleaning streets of gum is expensive and labour intensive. I’m really pleased this new fund has been established to support Councils across Wales and encourage people to think about the issues caused by chewing gum litter”

Allison Ogden-Newton OBE, Chief Executive of Keep Britain Tidy, said: “This is an exciting new opportunity for councils to tackle the ongoing problem of gum pollution.

“The grants will allow councils to clean up historic gum litter staining in our towns and cities, as well as taking action to prevent people littering in the first place.”

The fund will be opened to councils across the UK, with larger grants available for two or more councils working together to achieve greater impact.

The grants will consist of a cash award to fund street cleansing as well as access to a gum litter prevention package. Previous pilots have reduced gum littering by up to 64%.

Littering is a criminal offence and Welsh local authorities can issue penalties of up to £150, rising up to £2,500 if convicted in court.

Through the UK Environment Act 2022, the Welsh Government will be able to ensure that enforcement powers are used with a high degree of professionalism, whether by council staff or private contractors and introduce new enforcement guidance.