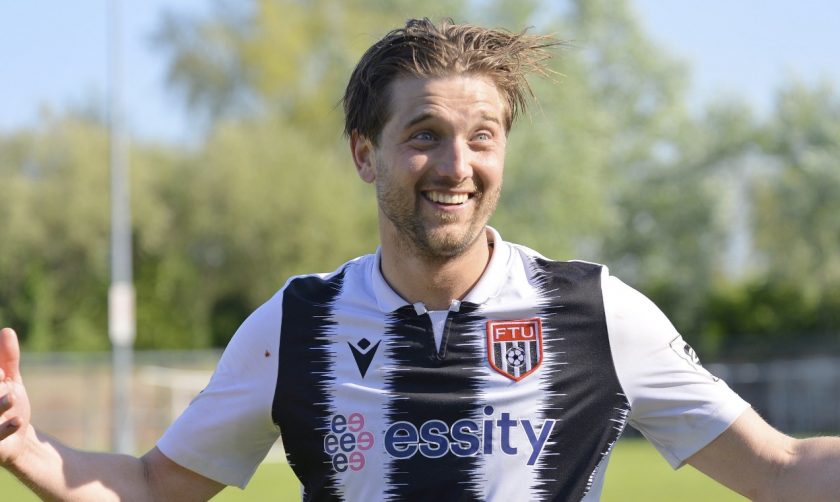 Flint Town United take on Caernarfon Town in the JD Cymru Premier Play-Off Final at The Oval this weekend.

The prize for winning the play-offs has been a chance to play in Europa League qualifiers, but Wales has lost a spot in Europe for the coming season.

The winners of Saturday’s playoff will join The New Saints in next season’s Scottish Challenge Cup.

Flint secured their place in the final following a nerve-wracking 3-1 penalty shoot out win at home to Penybont.

The teams couldn’t be separated following a 1-1 draw over 120 minutes.

Flint keeper Jon Rushton saved two penalties which took the Silkmen through to Saturday’s play off.

Caernarfon beat Cardiff Met 1-0 win last week and will have home advantage for the final after finishing the regular campaign in fourth, one place above Flint.

Flint have beaten Caernarfon in the last five of the six meetings – including a 4-0 win at the Essity Stadium in April.

Boss Neil Gibson said:  “The lads have been absolutely fantastic and the credit has to go to them and my group of staff,” said Gibson after the shoot-out victory.”

Speaking to cymrufootball.wales, Gibson said: “It wasn’t pretty in the second half against Penybont and they had better quality moments in the game than us, but we’ve installed a culture within this group that we never know when we’re beaten. I think winning on penalties was a reward for all their efforts this season.”

Gibson believes his side have overachieved this term by sealing a top-six finish after finishing 11th in the league last season and now wants to end the campaign with a piece of silverware.

“It’s been a really difficult season and I think we’ve overachieved in lots of areas” he added.

“Our lads have probably been running on empty for a number of weeks now with the amount of injuries that we’ve had but they keep going to the well for me.

“If we can get ourselves over the line that’s something Flint Town will always be able to say they achieved.”

The match kicks off at 2pm Saturday, you can watch it live on the Sgorio Facebook page and You Tube channel.


Tweets by Deesidedotcom
Wednesday May 25th 18:38