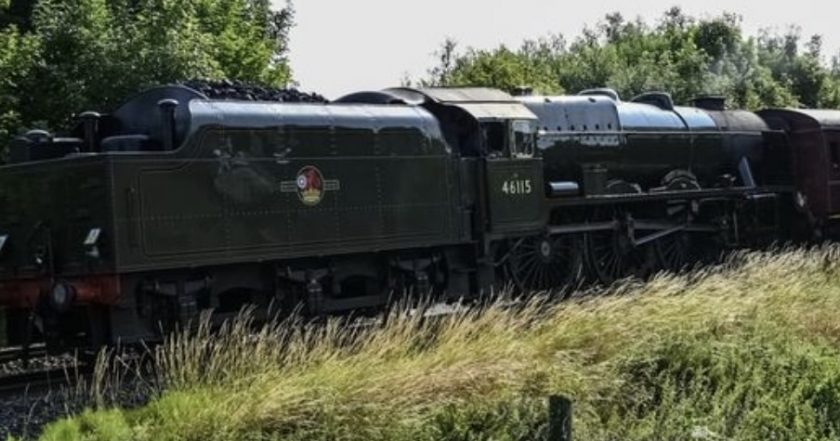 Update: LMS Scots Guardsman steamed through Deeside slightly ahead of schedule, Alan Downes was on hand to grab some stunning photographs posted below.

Original report: Fans of classic steam trains can catch a glimpse of a locomotive thundering through Deeside on Tuesday evening (20 July).

LMS Scots Guardsman will be passing through Shotton on the return leg of a day trip to Blaenau Ffestiniog.

Operated by The Railway Touring Company, The Welsh Mountaineer train set off from Preston just before 6.45am and headed to Warrington to pick up passengers.

From there it stopped at Frodsham and Chester before passing through Shotton and steaming alongside the Dee Estuary.

Travelling along the north Wales coast the train then stops at Llandudno Junction station to change in direction for the run along the Conwy Valley and into Snowdonia National Park before a steep climb up to Blaenau Ffestiniog.

‘Scots Guardsman’ leaving Warrington this morning, with ‘The Welsh Mountaineer’ to Blaenau Ffestiniog.

The Railway Touring Company describes today’s tour on its website, it says: “Our train is steam hauled by a locomotive from the Carnforth pool and leaves Preston at around 06:50 and heads up the West Coast Main Line to Warrington Bank Quay, where we stop to pick up more passengers. ”

“We continue to Frodsham, where further passengers may join the train and our steam locomotive takes on water. Chester is our final pick up point for passengers and, as we leave, we pass through the ancient city walls and cross the river Dee into Wales.”

The return leg will leave Blaenau Ffestiniog at 4pm passing through Shotton (lower level) at 6.56pm – on the way to Chester, timings are, of course, subject to change.

It was named Scots Guardsman in 1928 after the Scots Guards. After receiving smoke deflectors, it starred in the 1936 film Night Mail.

It was the first of the rebuilt engines to receive smoke deflectors and the only one to run with them as an LMS engine.