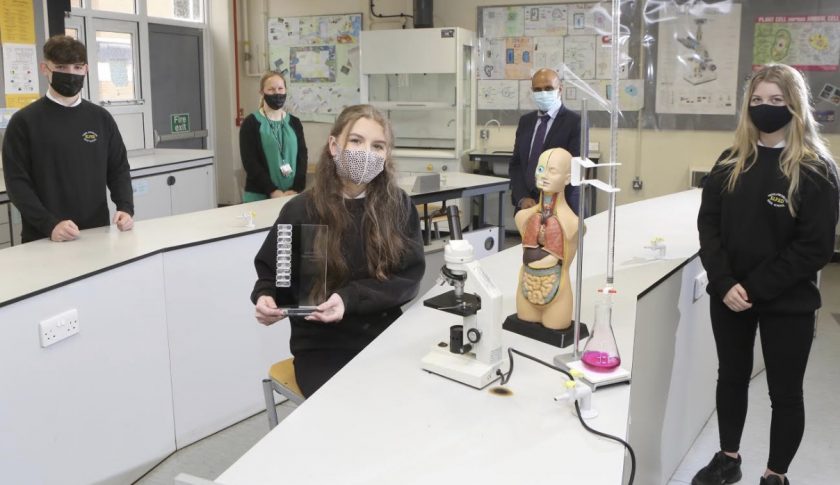 A trio of high-performing pupils from Buckley are looking to the future after being named the recipients of a school’s science prize.

Elfed High School students Madi Ion, Lauren Brocklebank and Max Jones have been honoured for their academic performance with acknowledgment in the school’s annual prize.

The year 11 pupils were nominated by staff from the Buckley school off the back of their work ethic, attitude to learning and assessment performance, with the three now working towards their final assessments before studying A-levels in September.

“Being recognised for an award like this one has given me a huge push to continue working hard and learning, especially in this last year where things have changed so much.

“I have been more motivated studying at home as it’s on your own back to do the work, and it is fantastic to see that the extra motivation and effort has been noticed.”

While Madi will be taking on other A-levels to follow her interest in law, this year’s runners-up Lauren and Max will be pursuing science-based A-levels.

Lauren will be studying physics, chemistry and biology A-levels as she aims to turn her passion for science into a future career as a surgeon.

She said: “I’ve always known that when I left school, something in the fields of science would come into what I’ve wanted to do.

“I’m interested in biology because it relates directly to the area of medicine I have wanted to look into and it provides a strong base of knowledge to build off onto, not only for my upcoming A-levels but further into the future as well.

“It feels great to be named as one of the standout students in an area I enjoy learning about.”

Max will join Lauren in undertaking further biological studies, with his interest in animals encouraging him to pursue the subject.

He said: “Caring for animals and learning more about them has long been a passion of mine, so biology has been something which has especially taken my interest at school.

“Biology seemed like a natural fit for me heading into my A-levels and while I don’t yet have my sights set on a future career, the lessons and information gained from the subject will allow me to further explore what a career in science would look like.”

Sana Niazi, director and commercial general manager at Synthite, said: “We are always passionate about helping students find their passions when it comes to science, and Madi, Lauren and Max are three worthy recipients who have shown a strong dedication and attitude to learning more about the industry.

“It is so encouraging to see the interests of these students shine through in their studies and I wish them all the best for their A-levels and future studies going forward.”