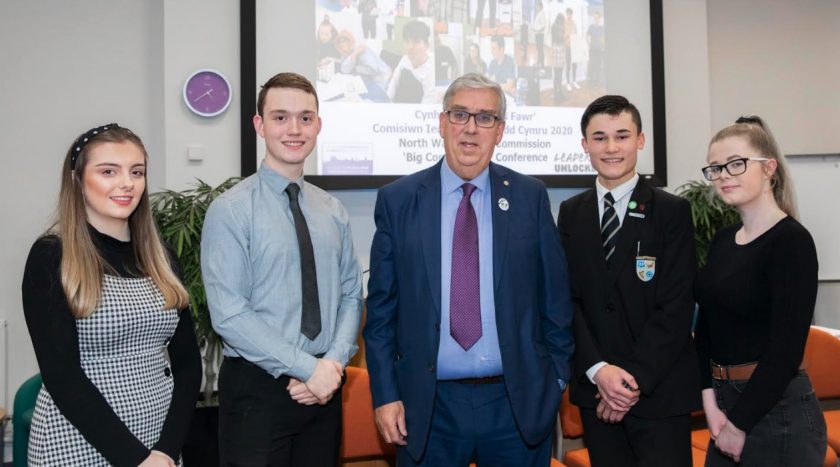 An influential group of young people are calling for a radical new approach to tackling drugs.

They have published a new report recommending that people with problematic drug use should be supported rather than criminalised.

The Youth Commission is being overseen by Mr Jones’ deputy, Ann Griffith, whose portfolio includes children and young people.

All of the members are aged between 14 – 25 and the four key priorities identified by them as major concern were the relationship between young people and the police, drug issues, anti-social behaviour and mental health issues.

They meet once a month under the guidance of Leaders Unlocked, a specialist social enterprise organisation that works with young people across the UK and which has been running eight similar Youth Commissions across England since 2013.

Also involved is Sian Rogers from Urdd Gobaith Cymru, the youth organisation, who is there to ensure equal access to the Welsh language in partnership with Council for Wales of Voluntary Youth Services

The Youth Commission role is to advise Mr Jones over the policing priorities for North Wales, particularly as they affect young people.

The report says: “Young people feel the reaction of the Police and teachers to drugs is very authoritarian, with a lack of support or consideration to the circumstances.

“Young people said punishment appeared to be at the forefront of their attitude towards anyone taking drugs. However, a more understanding approach would encourage discussion about why young people are using drugs.

“Young people are concerned of the amount of drug exploitation across the region. Specific areas mentioned were key towns and rural areas where drugs are widely used and distributed

“Remote villages and small towns feel ignored or ‘off the radar’ in terms of policing drug issues. Exploitation of young people and countryside drug deals were consistently mentioned within conversations with young people.

“Safety was a concern, along with feeling vulnerable after dark, due to fear of drug-related crimes. Young people felt that the Police ignored the situation and that it is normalised across the region.

“Young people spoke of Class C drugs being acceptable and they were unclear on the law surrounding these substances. There is a lack of local support services for those with addiction issues, and for those who live in supported housing where drugs are often distributed.”

The Youth Commission wants to see more done on crime prevention, and has called for schools, colleges and universities to offer peer-led education workshops on exploitation and drugs, including real life stories from those who have been exploited or addicted. It believes workshops should take a peer-led approach and should focus on support and guidance.

It also wants to focus on rural areas, to make them feel safer and advertise how to report concerns anonymously. It wants more police officers to be active and visible around areas of high drug use, and to take a harsher line with anyone exploiting young people to sell drugs.

He said: “Attitudes towards the way we should tackle the problem of drugs in our communities are changing and this report by the Youth Commission is a reflection of that.

“More and more people are coming to the realisation that the current approach to the problem just isn’t working, and that we need to do something different.

“I have been calling for drug misuse to be treated as medical issue rather than a criminal matter for many years. Throwing people in prison who are desperately unwell in many cases just makes the problem worse because it doesn’t tackle the underlying issues. To do that we need to give people help and support to turn their lives around.

“Doing that is not only better for the individuals concerned, but it is also better for society as a whole. It also saves a lot of money in the long run. Going after people for minor drug offences is a huge waste of police time. That time would be much better spent going after real criminals so we catch them, prosecute and imprison them.”

Deputy Police and Crime Commissioner Ann Griffith said: “This is a ground-breaking report and one that I am delighted that we are leading the way in Wales in seeking the views of young people about how the region should be policed.

“It is vitally important that we involve young people and listen to them to get their perspective on the crime and social issues they face. This is one of the ways that North Wales Police and the Commissioner’s Office are applying a children’s rights approach in line with the UN Convention of the Rights of the Child.

“We need to listen to young people and get their perspective on the issues they face and take them into account rather than just imposing our own views on them.”

It was a sentiment endorsed by Youth Commission member and former Ysgol Morgan Llwyd pupil, Charlie Parry, 18 from Wrexham.

She said: “We need to improve relations between young people and the police. I’ve been out on patrol with the police cadets and you do encounter hostility from young people sometimes. I’ve heard young children saying ‘pig’. We need to do more to bring people together.

“Drugs is a big issue where I live. You see a lot of people in the street during the day who are high on spice.

“I agree with Arfon Jones that we need to do more to support people who are addicted to drugs instead of criminalising them. I also think we need a drug consumption room in Wrexham so needles that children could pick up aren’t left out on the streets.”

Ysgol Uwchradd Caergybi pupil and Youth Commission member, Sarah Goodsir, 17, said: “I think there needs to be more of an understanding attitude towards young people because there could be underlying causes for their behaviour like trouble at home or mental health problems. I would like to see the police reach out to young people more. There are lots of young people who need help but don’t know where to turn.

“If you criminalise people who have drug problems and don’t give them help and support then you don’t tackle the root causes.”

Fellow  member and Ysgol Syr Huw Owen pupil in Caernarfon, Josh Taylor, 17 said: “I think there needs to be more understanding from the police of what young people go through. That could help them better understand why some people behave the way they do.

“The focus should be on going after criminal gangs, and there should be more help and support available to people who are addicted to drugs.”

Youth Commission member and pupil of Ysgol Glan Clwyd in St Asaph, Daniel Dain-Dodd, 17 said: “I support the idea of drug consumption rooms because it means people won’t be using dirty needles and leaving them where children might pick them up. It is also a way for drug addicts to access information about the help and support available to them.

“I think the Youth Commission has great potential and is a way for young people to raise awareness of issues with the police. There does seem to be a disconnect between young people and the police and I think it’s a good way of addressing that.

“When it came into my school, I was able to lead a lot of sessions, and I found that young people feel like they can be more open with someone who is a peer. I’d like to see the police do more to reach out to young people.”


Tweets by Deesidedotcom
Wednesday May 25th 17:23