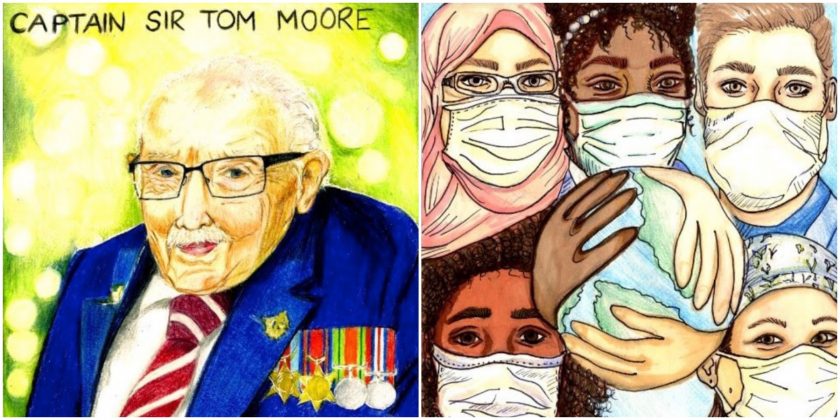 Two Flint High School pupils have made it to the finals in the world’s largest postage design competition.

Royal Mail has now announced the 24 regional winners of its ‘heroes of the pandemic’ competition.

The competition was open to UK schoolchildren to mark the important role played by key and frontline workers, as well as others, during the Covid crisis.

The winners from Wales, Northern Ireland, Scotland and the nine English regions, were chosen by a special panel of judges.

Flint High School year eight pupil Shachow Ali’s design featuring Sir Captain Tom Moore – the British Army officer and fundraiser who made international headlines in 2020 when he raised millions for charity – has made it to the final of the competition.

They are the only representatives from Wales and will now progress through to the final round – with a chance for their designs to appear on one of eight stamps next year.

Congratulations Shachow (year 8) and Jessica (year 11) who have both made the finals of the stamp design competition 👏 606,049 entries from across the UK, both pupils are now in the final 24 and are the only pupils representing Wales #FutureArtists #HeroStamps @flinthigh pic.twitter.com/uX9u8ZA8XQ

The final selection of eight designs will be made by His Royal Highness The Prince of Wales.

The Prince has previously chaired the judging panels for stamp design competitions run by Royal Mail in 2013 and 2017 and is a celebrated artist in his own right.

It is expected that we will announce the eight overall winners by 28 February 2022.

Prime Minister Boris Johnson said: “It is of great credit to the children of this country that in world record breaking numbers they picked up their paintbrushes, pens and paints and paid artistic tribute to the heroes of our coronavirus response.”

“Their brilliant efforts represent the collective gratitude of the nation to everyone who went above and beyond during the pandemic. Congratulations to all those who have made it to the next round and thank you to everyone who has taken part.”

To arrive at the 120 regional finalists, a network of judges, consisting of current and retired art teachers, evaluated each of the 606,049 entries.

Over a three-month period, the best entries, from Northern Ireland, Scotland, Wales and the nine regions of England were chosen from each age group.

From these 120 regional finalists, a special panel of judges will now determine the winning 24 regional designs and these will be announced in November.

From these 24 entries, eight winning images will be chosen as official Royal Mail stamps.

They will then appear on millions of items of mail across the UK when they are issued in the Spring of 2022.