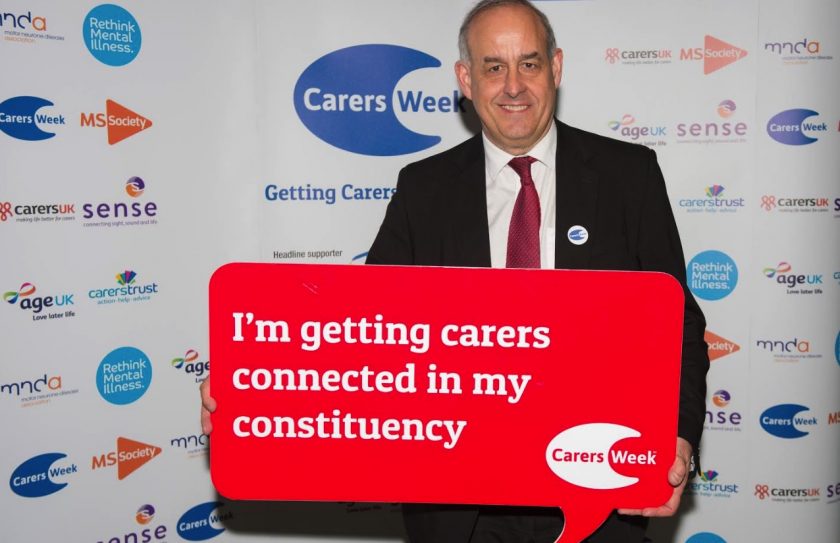 David Hanson – MP for Delyn – has pledged his support to unpaid carers across Delyn as part of Carers Week 2019, running from 10-16 June.

Carers Week is a national awareness week that celebrates and recognises the vital contribution made by those caring unpaid for someone living with an illness, disability, mental health condition or as they grow older.

Research released for Carers Week suggests there could be many more people than previously thought acting as unpaid carers to their family and friends – as many as 8.8 million adult carers across the UK.

The seven charities driving Carers Week 2019 are calling on individuals, organisations and services throughout the country to improve the lives of carers by getting carers connected to practical and financial support and are calling for a step change in the way society supports those caring unpaid for family and friends.

The call comes after new research revealed that one in three unpaid carers (35 per cent) are always or often lonely, compared with just one in twenty (five per cent) of the general population.

“Carers make a huge contribution to our society, providing vital and often hidden support to friends and family members. That is why I am supporting CarersWeek 2019 and encouraging individuals and organisations across Flintshire to think about what more they can do to get carers connected to support and ensure carers feel valued and supported.”

“Caring for family or friends can be a rewarding experience, but without the right support it can also have a huge impact on carers’ lives. Our research shows that many carers feel alone and are struggling with low levels of wellbeing despite the invaluable contribution they make.  It’s time carers received greater recognition and support.

“Government, employers, health and care professionals, schools and universities, and each of us individually, all have a role putting carers in touch with practical and financial help.”

The headline supporter of Carers Week 2019 is British Gas, who will be providing its customers with support and advice on unpaid caring throughout theweek, and Nutricia Advanced Medical Nutrition also supporting.

Thousands of events are taking place across the country this week, and thousands of people have already pledged their support for carers online. To find out more about events in Flintshire or for further information about caring visit www.carersweek.org