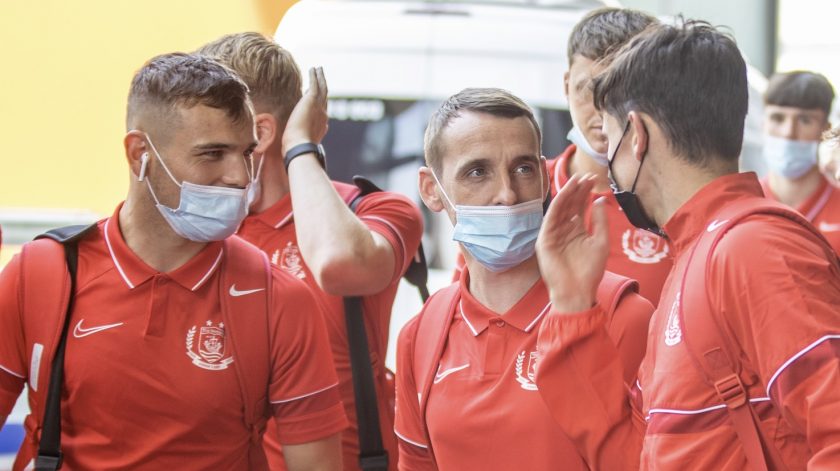 Connah’s Quay Nomads have arrived in Armenia ahead of their Champions League qualifier second-leg clash with FC Alashkert.

Wednesday evening will see the Nomads take on Alashkert at the Republican Stadium in the Armenian capital Yerevan.

The sides head into the second leg of this First Qualifying Round tie all square after a 2-2 draw at Aberystwyth Town’s Park Avenue last Wednesday.

Last Wednesday was a game of historic moments for The Nomads as Craig Curran scored the club’s first ever UEFA Champions’ League goal in the 19th minute thanks to his back post header.

Totti’s final Champions’ League goal came on 38 years and 59 days, whilst Horan’s late equaliser was on 39 years, 4 months and 19 days.

According to the BBC, Nomads have a squad of just 15 players available for Wednesday’s match.

“Two players because they need to self-isolate after coming in close contact with Covid-19 cases.

And three part-time players didn’t travel because of the effect self-isolation would have on their day jobs.

Danny Holmes fractured his knee cap last Wednesday and he will be out for up to six months, Sameron Dool and Jay Owen are also out with injuries.

The Nomads’ journey to Armenia will be one of the longest European journeys in the history of Welsh teams competing on the European stage, with the team travelling a similar distance to that of the national team who recently played Euro 2020 fixtures in Baku.

Tomorrow’s match kicks off at 4.00pm UK time due to the three hour time difference in Armenia.

While The Nomads needed to travel almost 100 miles to our home stadium in Aberystwyth, Alashkert will also be playing at a neutral home venue, however their journey is only four miles across the city of Yerevan to play at the Republican Stadium.

The stadium has a capacity of 14,403 and is the home to the Armenian national team and was the temporary home to Alashkert during the 2013/14 season as their own stadium underwent renovation works.