Airbus reveals latest addition to its family the A220. 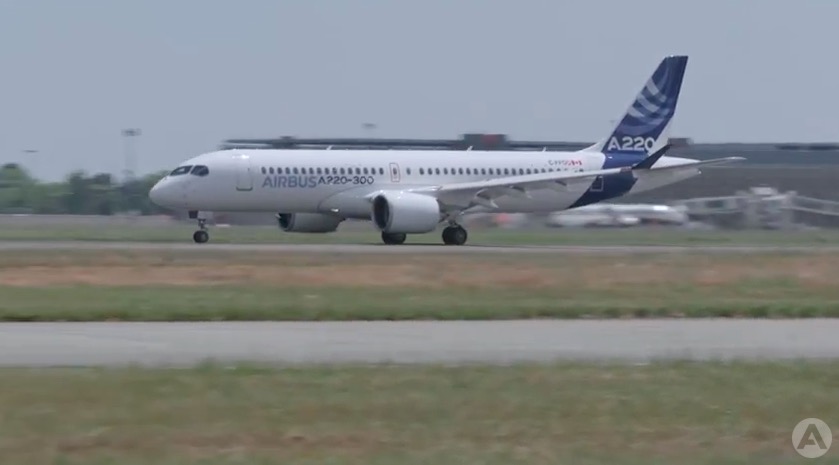 Airbus has revealed the A220 at a ceremony held at its Henri-Ziegler Delivery Centre, near Toulouse this morning.

The event was witnessed by Airbus employees and members of the media, the A220-300 landed at 11.25 wearing its new Airbus name and colours which had been freshly painted at a UK paint shop.

The wings for the A220 are made at theBombardier factory in Belfast, the deal struck with Airbus will safeguard around 1000 jobs there.

“Everyone at Airbus has been looking forward to this historic moment. Today, we are thrilled to welcome the A220 to the Airbus family and are honoured to see it wearing its new Airbus colours for the first time.

I pay tribute to all the women and men at Bombardier and the supply chain who have strived over the past years to bring this fantastic aircraft to the world. The A220 now enters a new phase in its career with all Airbus’ resources behind it to further its commercial success worldwide.”

It is good to see the #A220 here in Toulouse and I’d like to say thank you / “merci” to everyone who has helped to make today’s flight possible. pic.twitter.com/91ILBhf4xA

Speculation that Airbus is to rebrand the Bombardier C Series program, which the European planemaker bought a majority stake in recently – looks to have been confirmed via social media after a photograph was posted onto Twitter.

The image posted this morning shows a Bombardier CS300 repainted into an Airbus A220 livery – a model which, until now, has not existed – the jet is currently on the way to Toulouse for a ‘big reveal.’

Airbus acquired a 50.01% stake in the CSeries Aircraft Limited Partnership, a joint venture between Bombardier and Investissement Quebec (IQ) – the deal, which was initially announced in October 2017.

Airbus will work with its partners Bombardier and IQ to “fully unlock the C Series’ potential and create significant new value for customers, suppliers, employees, shareholders and the communities in which the partnership operates.”

The deal will safeguard 1,000 jobs at the Bombardier wing factory in Belfast