Airbus BelugaXL gets stuck in mud after landing at French airport 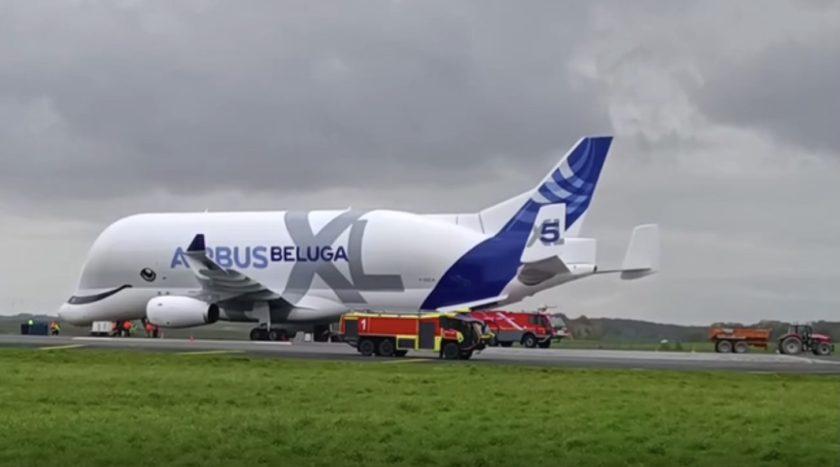 An Airbus Beluga XL has been stuck in mud over the weekend of after taxiing off the runway at a French airport.

Beluga XL5 was operating a cargo flight on Friday from Saint Nazaire to Albert Picardie Airport in France.

Just after landing the giant transporter, a familiar sight in the skies above Deeside, missed a U-turn at the end of the runway and ended up on the soft ground, “at very low speed and without injured.” An Airbus spokesman is reported saying.

Adding: “Everything will be done to ensure that the impact on the production activities at Airbus is mitigated.”

According to AV Herald.com “An Airbus Transport International Airbus A330-700 Beluga (Beluga 5 XL), registration F-GXLN performing flight BG-127N from Montoir to Albert (France), landed on runway 27 at 12:43L (11:43Z), rolled to the end, turned into the turn pad to begin the 180 degrees turn for backtracking, and completed about 135 degrees of the turn but then became disabled with the nose and right hand main gear off the paved surface in the grass.”

“The aircraft is still not removed from the position, the runway is still closed.”

Albert Picardie airport in northern France is primarily used for the transportation of Airbus aircraft parts from the company’s factory at Méaulte nearby.

It’s been an eventual few weeks for BelugaXL5 which only came into service during the Summer, earlier this month the transporter was struck by lightning while taking off from Hawarden Airport.

A huge blue flash was seen and loud explosion was heard across Deeside at around 1pm on November 1.

At the time Airbus said: “This is a routine event in aviation and the aircraft continued with its journey to Hamburg as planned.”