Work will begin on Sunday evening to install ‘average speed’ cameras along A494 through Deeside.

The new speed camera system will manage the speeds of motorists along a section of the busy trunk road which links the M56 with the A55.

The Welsh Government cut the speed limit in a bid to reduce high levels of nitrogen dioxide on several roads across Wales where emissions have been found to exceed legal limits.

Regular A494 users say the road has become dangerous since the speed was cut as many drivers are choosing to flout the 50mph limit.

The government confirmed in May was in ‘discussions’ with police and its speed camera partnership Go-Safe over the best way to enforce the speed limit reduction along the A494.

Previously Minister for Environment Hannah Blythyn said: “I am committed to taking action to reduce air pollution in Wales to support a healthier future for our communities and protect our natural environment.

Current levels of nitrogen dioxide exceed the legal limit at the five road locations, so we need to act as soon as possible.

“Our initial studies tell us that 50mph speed limits should have the greatest potential to improve air quality at each location.

The actions we take to improve air quality in Wales have a key role in supporting the right conditions for better health and well-being.”

The information on the works along the A494 surfaced in a weekly North and Mid Wales Trunk Road Agency works bulletin, with limited information as below: 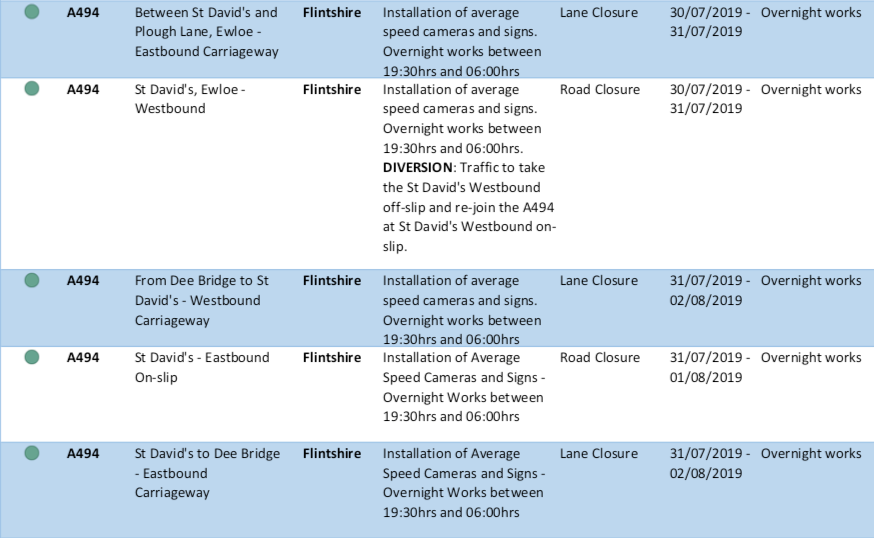 The work is set to start on Sunday and is scheduled to be completed by Friday August 2, overnight lane closures will be in place starting from 7.30pm through to 6am.

It is unlikely the cameras will be in operation for several weeks as commissioning and calibration work will need to take place once they have been fixed in place.

A report published last year said implementing the 50mph speed limit permanently would cost in the region of £400,000 “this would include average speed enforcement cameras and equipment, traffic signs and ongoing maintenance.”

It says emissions will be “reduced by up to 10%” and that “reducing speed limits on the strategic route reduces the occurrence of flow breakdown during congested periods, and results in an overall better environment.”

The report also says the reduced speed limit could reduce stress levels in some drivers “as there will be a reduced fear of potential accidents” however others may be frustrated with having to reduce their speed “without understanding the associated benefits to air quality.”

Average speed cameras were installed along the westbound A55 at Rhuallt Hill in Denbighshire last June.

During the first 12 months of operation 9700 motorists were caught by the cameras generating nearly £1 million in fines – assuming that all drivers were given the current minimum fine of £100.

How do average speed cameras work?

Average speed cameras – or SPECS – are installed on lampposts, mounted anywhere from 75m apart to more than 20km apart.

Using Automatic Number Plate Recognition (ANPR) technology, they continuously record cars passing from one to the other, with the average speed calculated over the known “baseline” distance.

Even if you slow down while passing directly under the cameras, it may not be enough to bring down the average speed between the two posts.

The system is said to encourage a smoother, safer style of driving, requiring drivers to pay constant, close attention to their speed over a given distance.

If the average speed between two sets of SPECS cameras exceeds the speed limit, an offence record is created, and images and data are transferred back to central control unit for processing.