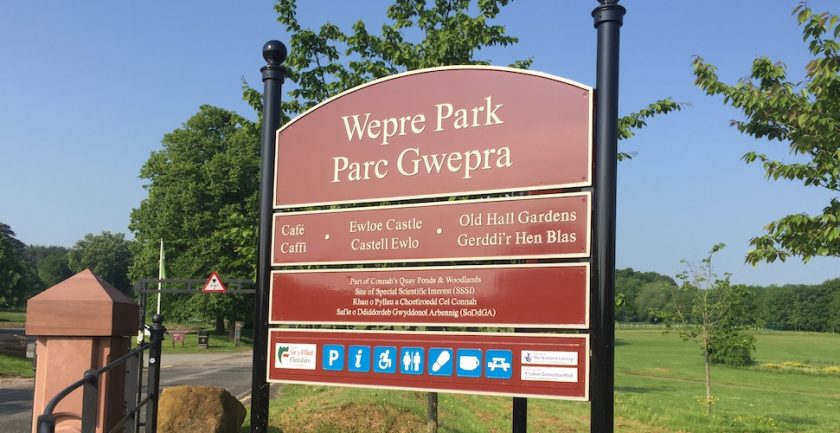 Flintshire Council has said Wepre Park car park will remain locked this weekend despite an increase of visitors parking on Wepre Lane and using the park.

Some local residents raised concerns last weekend over the number people parking cars on the road and heading into the park, despite it being ‘closed.’

That led to an influx of day trippers from areas such as Liverpool and Manchester prior to COVID-19 lockdown measures coming into force.

Flintshire Council closed the park on March 23 amid concerns people are not following social distancing advice.

At the time a spokesperson said the council was ”becoming increasingly concerned at the public health risks from the public not practising social distancing in open spaces.

For this reason, Flintshire, along with many other Councils across Wales, has taken the decision – in the interests of public health – to close the enclosed children’s play areas and country parks.”

Following correspondence from a number of Deeside.com readers – concerned people were flouting lockdown rules and using the park – we asked the council on March 26th if the park was open or closed.

The council responded saying: “Staff are not currently attending our country parks.

If anyone has any concerns about people using these areas against government advice or about anti-social behaviour please report them to North Wales Police.

Currently rights of way are open but usage is being monitored and the status will be kept under review.”

Ahead of the May Day bank holiday, Flintshire Council issued an update stating: “Over the bank holiday weekend it is essential that everybody continues to avoid non-essential travel and ‘stay at home’.

“Areas in Flintshire where we have had reports previously of people congregating, including Wepre Park in Connah’s Quay, continue to be monitored by North Wales Police.”

Since then lockdown measures have been eased slightly and people in England are now allowed to drive anywhere to take exercise, except across borders in Wales and Scotland.

In Wales the stay at home message remains in place and Welsh Government guidance on exercise, as part of regulation 8 of the Health Protection (Coronavirus Restrictions) states: “travelling by vehicle to exercise should be avoided unless there is a good reason for doing so.”

Last weekend was the first in which England’s new eased measures were in place, a large number of cars were spotted parked along Wepre Lane and people going into the park.

Again, we received correspondence from local residents asking if the the park was open or not, one person told us they were asked by a ‘family from Liverpool’ for directions to Ewloe Castle.

With the apparent uptick in the number of people driving to the park, we asked Flintshire County Council on Monday: “With decent weather forecast and bank holiday weekend ahead, what is the latest advice from the council with regards to people using the park.”

The council did not respond to our query however on Friday it did issue an update which includes some slightly clearer guidance on Wepre Park.

The play area, visitor centre and toilets remain closed off but people living local to the park can exercise there and anglers can use the Rosie fishing pond.

However, with people in Wales told not to drive to take exercise and those in England not permitted to cross the border into Wales to take exercise, the car park will remain closed.

Not local to Wepre Park? Then, please don’t visit at this time and respect the travel restrictions in place in Wales – #StayHome and Stay Safe and we look forward to seeing you in the future.@FlintshireCC

— Flintshire Countryside and Coast (@FCCcountryside) May 23, 2020

“Over the Bank Holiday weekend it is essential that people in Flintshire and elsewhere follow Welsh Government regulations which do not allow people to drive to places in order to exercise, unless they have mobility issues.

Most people are being considerate to others and are following the rules. However with the Bank Holiday weekend approaching, there remains a risk that some people might attempt to congregate in groups or visit public open spaces against the regulations.

The car park at Wepre Park in Connah’s Quay is still locked and the play area, visitor centre and toilets remain closed.

People living local to the park can exercise there and local anglers can also access ‘The Rosie’ fishing pond. ”

“‘Social distancing rules must be followed closely at all times.”

The update goes onto say:

There is limited legal parking available at popular destinations like Talacre, and our Enforcement Officers will be patrolling this and other areas on a regular basis over the Bank Holiday weekend.

The Lighthouse Car Park, Talacre has also been closed by the proprietor.

Areas where we have had reports previously of people congregating, continue to be monitored by North Wales Police.