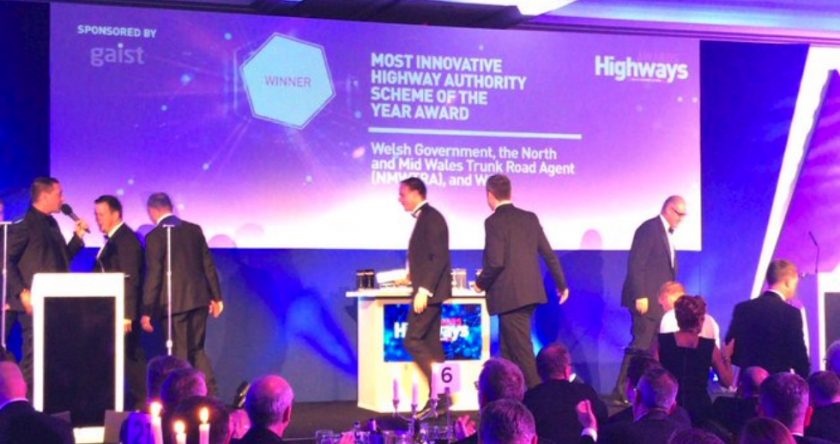 The Welsh Government has won a major award for an ‘innovative’ study aimed at increasing reliability and improving journey times on the A494 and A55.

The Welsh Government, the North and Mid Wales Trunk Road Agent (NMWTRA) and consultancy WSP scooped the award for ‘Most Innovative Highway Authority Scheme of the Year’ in front of 500 industry professionals at the Lancaster London last week.

The award recognises the collaborative work on a study – results of which were published in October 2017  – which took a close look at improving the A494 corridor from the Ewloe Interchange to Drome Corner and the A55 from Posthouse roundabout to Holyhead.

The work was in addition to the already proposed £250m Deeside ‘Red Route’ corridor upgrade.

The study, commissioned by Transport Minister Ken Skates, also looked at suitable diversion routes at times of roadworks and improving how incidents are dealt.

Many of the diversions use rural secondary roads alongside the A55 and generally unable to cope with an influx of traffic whenever the A55 is forced to close.

As part of the report, ten ‘quick wins’ were identified to provide “immediate benefits to the travelling public” their introduction was prioritised following the publication of the report, and included:

The team from the Welsh Government, NMWTRA and WSP received their award from TV and radio presenter Colin Murray.

The Minister for the Economy and Transport, Ken Skates, AM, said:

“I am delighted the Welsh Government and wider team has been recognised with this major award, which is well deserved. On the A55 Resilience Study they took an innovative approach to the appraisal process, helping us deliver quick and short term wins as the project has progressed.

The team included the North and Mid Wales Trunk Road Agent and consultant WSP who undertook extensive consultation with an extensive range of stakeholders, and the project will see significant benefits for road users.”

Adrian Tatum, director of events for the Highways Awards, said:

“This year, for each Highways Award winner, we received at least 15 other impressive entries bursting with innovation.

This reflects a phenomenal period of an industry always seeking new and better ways to make the UK’s road network safer, greener, and better-maintained.

There are also clear benefits of public sector funding and private sector innovation coming together. Congratulations to all this year’s winners and our thanks to the sponsors of these coveted awards.”