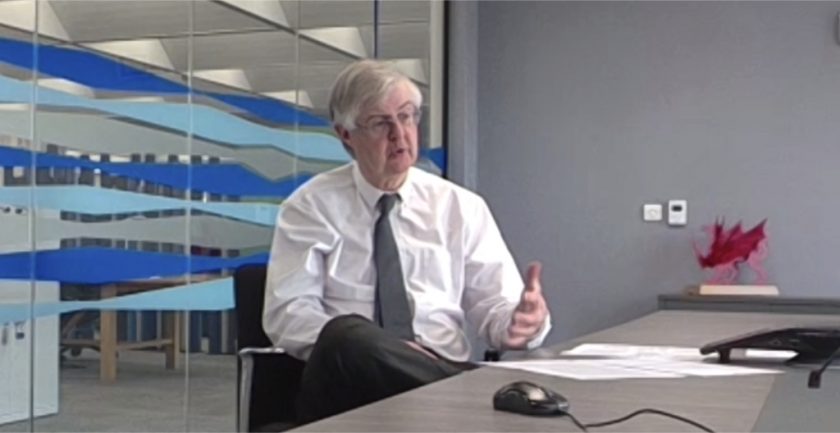 The 17-day “firebreak” lockdown in Wales has been successful in cutting the number of coronavirus infections first minister Mark Drakeford has said today.

But he warned we can’t “fritter all that away” by going back to behaving in ways that will drive those numbers back up again.

The firebreak between October 23  and November 9, saw non-essential shops and hospitality venues close, indoor household mixing was banned and people were advised not to travel except for exceptional reasons.

Secondary school pupils from year 9 upwards were given an additional week off following the half term holiday.

“He says the evidence is now good enough to say the firebreak period did succeed.”

“We’ve had 10 days in a row in which numbers across Wales have been coming down.”

“Positivity rates coming down and the number of people suffering from coronavirus coming down.”

“SAGE said a week ago the R number in Wales could have been below one.”

“Now, what we have to do is to build on that, and to make sure that we don’t fritter all that away by going back to behaving in ways that will drive those numbers back up again.”

Locally the the rolling 7 day case rate per 100,000 in Flintshire stood at 151, at the start of the firebreak.

Ministers stressed that any impact of the ‘short sharp’ lockdown in Wales would only start to be felt around two weeks after it ended.

According to the latest data from Public Health Wales, the rolling 7 day case rate per 100, 000 in Flintshire now stands at 160, higher than at the beginning of the firebreak period.

As reported earlier this week, there’s been a spike in COVID-19 cases within Flintshire care homes, 12 establishments currently impacted.

Northern Ireland is set to go back into lockdown from next Friday.

Schools will be allowed to stay open.

Asked if the same could happen in Wales, Mr Drakeford said: “Our plan has always been to find a pathway through to Christmas without needing to reimpose restrictions of the severity that we saw during the fire brick.

“Provided that we all do the simple things that we’re asking people to do, reducing the number of people we meet with traveling only when essential working from home wherever we can.”

“They’re the simple things that we all know, provided we all do that, and the firebreak will have given us a platform that will take us through to Christmas.”

“If that doesn’t happen the numbers will rise again and we’ll be back to where we started.”

“My message to people in Wales today is very much that the firebreak succeeded thanks to everything that you and we did together.”

“We can go on succeeding but we only do that by not acting as though coronavirus had gone away, not lapsing back into the ways that were driving up the numbers earlier in the autumn and provided we do those simple things together.”

“There is a pathway through to Christmas, but it’s not guaranteed, because it really does absolutely fundamentally depend upon every one of us playing our part.”

The first minister will hold the Welsh government’s coronavirus press conference at 12.15pm today, you can watch it via twitter: https://twitter.com/WelshGovernment