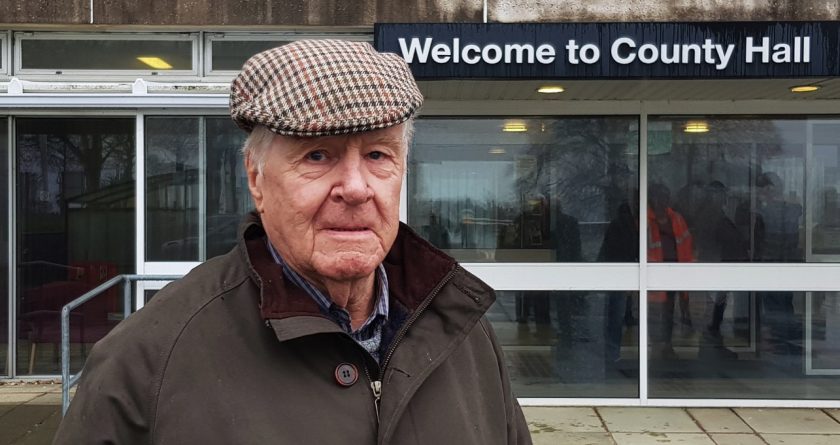 A decision to put council tax rates up in Flintshire by almost nine per cent has been branded ‘a disgrace’.

Last week, the majority of councillors agreed to an 8.75 per cent rise, which equates to £103 extra a year for the average household bill.

A small group of protesters gathered outside County Hall in Mold this afternoon as politicians met to formally ratify the move.

Among them was 86-year- old George Roberts, who said he would struggle to pay for the added amount with his pension.

Flintshire Council has defended the increase by highlighting that it is the 19th lowest funded authority out of the 22 in Wales, and has received a a cash cut of 0.3 per cent this year.

Mr Roberts, who lives in Nercwys, said: “Rates are going up and we can’t afford it.

“They took the brown bin off us and they wanted us to pay £30 for that which we can’t afford.

“We’re paying enough as it is without any extras. It’s daylight robbery I think.

Officers said the vote was largely intended to be procedural to ensure tax levels for different communities were set within the legal timeframe following the previous week’s budget agreement.
However, it turned into an angry exchange between different political factions.

Council chairman Cllr Paul Cunningham had to call for order on several occasions and one member described the behaviour displayed as ‘appalling’.

The row was triggered when Cllr Richard Jones of the Independent Alliance accused the authority of financial mismanagement and said the Labour-led administration lacked leadership.

He also suggested a senior councillor had been distracted by personal matters. He said: “I will be not deflected from the mismanagement of the way budgets are done here.

“For the first time ever in Flintshire, every valuation band will be above £1,000.

“I’ve had two people already phone me last night saying all their income will go towards paying bills because of this increase.

“This cabinet lacks leadership and it lacks direction.”

There were shouts of ‘disgrace’ from the Labour benches following his comments.

An opposition motion which called for the authority to use more of its reserves to reduce the council tax rise to under six per cent was defeated last week.

But Cllr Patrick Heesom, leader of the New Independents Group,  said it was one which should have been approved, despite advice from officers that it would pose a large financial risk. He said:

“The point we want to make now is we do want to be recorded as voting against this high tax rise.

“At the end of the day, it was a deficit budget and they used council tax to bolster that gap.

“You can’t come back and do this again and the way you are going you’re heading for it.

“We cannot support this council tax rise, we’ve given an alternative and given our reasons.”

In response, council leader Cllr Aaron Shotton said the authority had chosen to put rates up in order to protect school and social care budgets.

He accused Cllr Jones of using ‘nasty’ tactics and said there were services available to residents in Flintshire which had been cut in other areas of the UK.

Cllr Shotton said: “I think there is a very clear dividing line here and there is an undertone.

“What we have done to protect services sets Flintshire apart from many councils across the UK.

“In a time of austerity some individuals are almost austerity deniers.

“They deny that austerity has happened in the last ten years.

“I’d appeal to a number of people on the other side to look at what you’re being led by. You could do better than that.

“This disgraceful attack I hope wasn’t directed to staff in this authority about mismanagement.

“This is dirty, nasty politics, the mask slipped and people in this chamber saw it for themselves.”

Referring to Cllr Jones’s absence from last week’s budget meeting he added: “I don’t know where you were Cllr Jones, you may have been on a beach for all I know.”

The majority of councillors voted by 37 to 22 in favour of setting the new rates, which will come into effect from April.

During the same meeting they also backed a motion put forward by Cllr David Healey (Lab), calling for a radical reform of the council tax system by the Welsh Government.