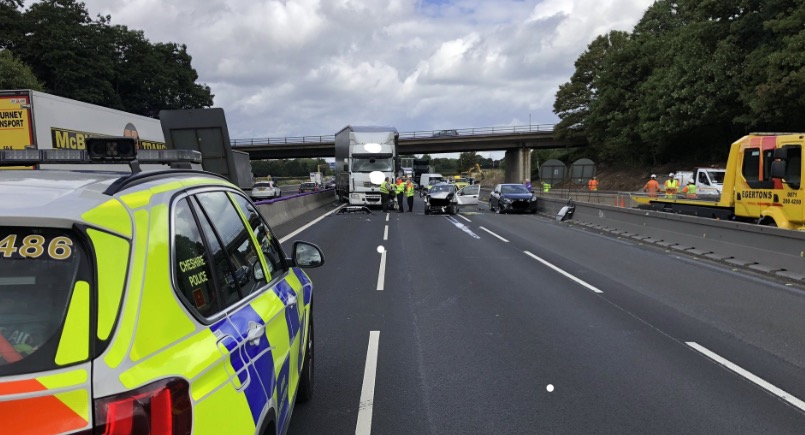 The M6 in Cheshire has now reopened following a serious collision earlier today.

At approximately 11am today, Thursday 16 August, officers were called to reports of a collision on the M6 near Knutsford.

The incident, which involved a black Mazda 6, a silver Chevrolet Matiz and a Renault HGV, occurred on the southbound carriageway near to Knutsford Service Station.

As a result of the collision a full closure was put in place on the southbound carriageway. The road reopened at approximately 2.45pm.

One person is believed to have sustained serious injuries; he has been taken to Salford Royal Hospital.

Anyone with any information in relation to the incident, or dashcam footage of the area at the time of the incident is asked to contact Cheshire Police on 101 quoting IML 156122.

Information can also be submitted online at general enquiries.

Update 2.30pm: North West Motorway Police group have given a update on social media, posting a picture of the scene (above) as recovery of the vehicles involved in the earlier collision takes place – a spokesperson said:

“Reference the collision on M6 southbound at Knutsford, recovery are removing vehicles from the scene. As soon as that is completed, the motorway at J19 will be re-open. Thank you to drivers for their patience.”

Update 2pm: A police investigation is underway following a serious collision M6 southbound in Cheshire between J19 Knutsford and J18 HolmesChapel and Middlewich.

The road is expected to remain closed for several further hours, long delays back to J21 Warrington. A diversion is in place:

Motorists are being diverted and should follow the solid circle symbol. Exit at J19 and take A556 south. At roundabout with A530 take first exit and head south to Middlewich on the A530.

Continue forward in Middlewich on to the B5309. At roundabout with A54 turn left. Continue on A54 eastbound to J18 of M6

Earlier report: The M6 in Cheshire is currently closed southbound following a serious collision near Knutsford.

The incident, which involves two cars and a HGV, was reported shortly before 11am today, Thursday 16 August.

Police, fire and ambulance are in attendance at the scene and a full closure is currently in place on the southbound carriageway from junction 19, Knutsford, to junction 18, Middlewich.

Cheshire Fire and Rescue service has said they have one fire engine from Middlewich, Winsford and Holmes Chapel in attendance:

“Fire crews are at the scene of a collision on the M6 between junction 19-18 involving a lorry and two cars.

Firefighters have removed one man from a car and handed him into the care of paramedics.”

Traffic is queuing back to near the M56 junction.

An Air Ambulance has now left scene however the Police are conducting collision investigation.

Vehicles stuck within the closure are being turned and released back to J19, please await instruction from Police or Traffic Officers on scene.

Motorists are being diverted and should follow the solid circle symbol. Exit at J19 and take A556 south. At roundabout with A530 take first exit and head south to Middlewich on the A530.

Continue forward in Middlewich on to the B5309. At roundabout with A54 turn left. Continue on A54 eastbound to J18 of M6.