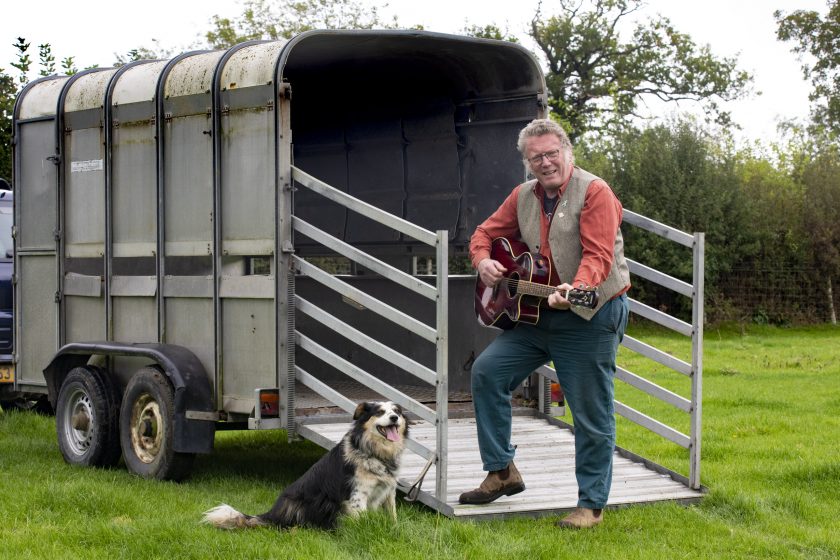 A sheep farmer whose videos have earned him a number of online fans has released a new song about his favourite trailer.

John Hughes received over 11,000 views on his latest video in which he sings about Flintshire-based ‘Ifor Williams Trailers’ alongside his sheep dog, Poppy.

The 61-year-old guitar player, known as the ‘Singing Farmer’, now earns most of his income from performing at private gigs across Powys.

He racked up thousands of views on his Facebook page with daily video posts throughout the pandemic, including this song about his beloved trailer.

Acquiring the trailer from a fellow farmer 15 years ago in exchange for cattle, the grandfather of two admits life would not be the same without it.

His affection is captured in lyrics such as ‘I’m content with all God’s sent, and my Ifor Williams Trailer’ and other lines which detail life events.

“Farmers can turn their hands to most things, like welding, plumbing, electrics – why not singing?” said John.

“As soon as lockdown happened, I started doing a song a day. We put them on Facebook, just me and my dog – well, you try to get the dog involved but she wasn’t really cooperative. I had a job to get her to sit beside me because she doesn’t like the sun in her eyes.

“Quite often I find myself sitting in a queue of Ifor Williams trailers, on the way to market, and singing songs to myself. That’s when I had the idea – and people are always telling me to sing about what I know.

“I literally got up Sunday morning and wrote it and we recorded it in about 20 minutes. I was really pleased with the line ‘I’m content with all God’s sent’ – you have to catch people’s attention early in a song.

“Now everyone wants my trailer! It carries all the amps, lights and speakers to my shows. When my daughter moved out, it carried all her junk off to Oswestry. It has been very reliable.”

It is not the first time one of John’s songs have become popular.

A few years ago, he penned a song about the Wales Rugby Union team taking on Ireland in the Six Nations Championship.

“It’s good exercise for my brain to put the words and the tune together. I love it.

“I think people appreciate I’m not in a recording studio. It’s just a guitar and a voice and about putting an idea out there. It could be more polished but to be really polished you need to be singing it to a live audience.

“I wrote one called ‘Fireflies’ and sang it in front of one of our bulls. He was standing there right behind me grunting and stamping his feet and I was sitting there thinking: ‘I hope he doesn’t take me out!’

“I’ve had 10,300 views since Sunday on this one. I went to the pub last night and the guy in there was raving about it. Farmers are very quiet people, but they have their ear to the ground and know what’s going on.”

When switching from dairy farming to sheep and cattle a decade ago, John reunited with two former school band members and an opportunity struck.

“We got a few bookings and I’ve been pretty much singing full-time for the past 10 years,” he said.

“Pre-lockdown I sang in an Irish pub in Llandudno for St Patrick’s Day. I was doing weddings, funerals, christenings, parties and quite often I’d go into a care home for the afternoon.

“Music is communication. I’m quite a quiet, shy person but I can communicate through music and that’s a beautiful thing.

“I was singing in a home in Shrewsbury one day. There was a lady in a cot bed with her carer beside her. The carer was crying her eyes out and I was wondering why.

“I went over to ask her if everything was okay and she explained this lady had been in the home for five years and had never spoken to anybody, but she had sung every single song with me.

“It was enough to make me cry – music is a way of reaching out and connecting with people.”

“We’re used to customers singing our praises, but John has taken it quite literally!” he said.

“Amid the doom and gloom of a pandemic, John’s song was like a ray of sunshine and has lifted the spirits of all who have watched it.

“We have distributors from all over the world who have been loving listening to John’s song and have been sharing and commenting on his video.

“We are thrilled to be the subject of his latest hit and wish him all the best in his singing career.”

For now, John is content to combine farming with local gigs but admits he has not yet put to bed his dreams of professional song writing.

He said: “I’d really like to make some money out of writing songs. People book me regularly to sing other people’s songs.

“To be a stand-alone artist you have to have your own material and be different.

“I left school at 16 and have been a farmer ever since but I’ve been writing songs for a very long time.”