Politicians praise for Coleg Cambria commitment to the health and wellbeing of students and staff. 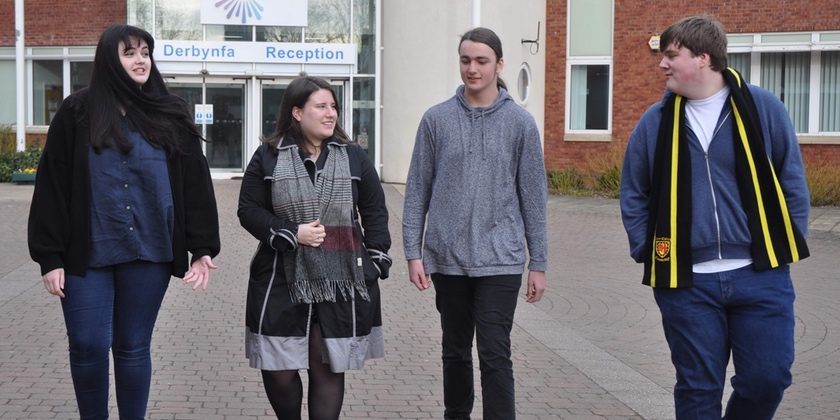 Coleg Cambria has been lauded by political leaders in Wales for its commitment to the health and wellbeing of students and staff.

Finance Minister Rebecca Morgan joined Mr Sargeant in encouraging public sector organisations across the country to take a lead from the college, which has implemented a series of systems and processes to safeguard the health, mental health and wellbeing of its community, notably students.

Cambria’s Future Generation Plan is underpinned by the seven wellbeing goals that make up the Act, which was itself designed to improve the economic, social, environmental and cultural wellbeing of Wales through sustainable development.

Mr Sargeant said: “In terms of legislation, I believe the Act to be one of Welsh Government’s proudest achievements, because it challenges you to think and do differently.

“We are now reaching three years since the Act became law, and there are lots of organisations across Wales that are doing some fantastic work, including Coleg Cambria in my own constituency.

“They have created their own future generations plan even though they don’t have to. I think they clearly recognise the importance of the Act and the opportunities it presents.”

Members of the Senedd welcomed the work of Coleg Cambria, including the Minister, who said: “This (the Act) is something that we are all immensely proud of achieving here in Wales.

“And I am really delighted that Coleg Cambria and others have very much taken on board the spirit of that Act. Even though they’re not subject necessarily to the Act themselves, they are taking steps to work within the ways of working of that Act to ensure that what they do has a positive impact for the generations that will follow.”

Coleg Cambria chief executive David Jones was heartened by the comments and said while the Act is specifically aimed at the public sector and local authorities, the value of their work and size of the institution has an impact on many thousands of people across the region and beyond.

“The Future Generation Plan aligns our values, purpose and strategy with the needs of our learners, employees, local employers, other customers, suppliers and the wider community,” he said.

“It brings together excellent current and previous practice across the college, to provide a strong foundation on which to grow and diversify our work to support future generations.

“The Plan also encompasses our new approach to charity moving forward under the brand name Calon, which means ‘heart’.”

Mr Jones added: “I would like to thank Jack Sargeant and the Minister for their kind comments and for acknowledging the work we have put into this.

“I can assure them we will continue to develop and take pride in being recognised as a standard bearer for the Act and what it stands for.”