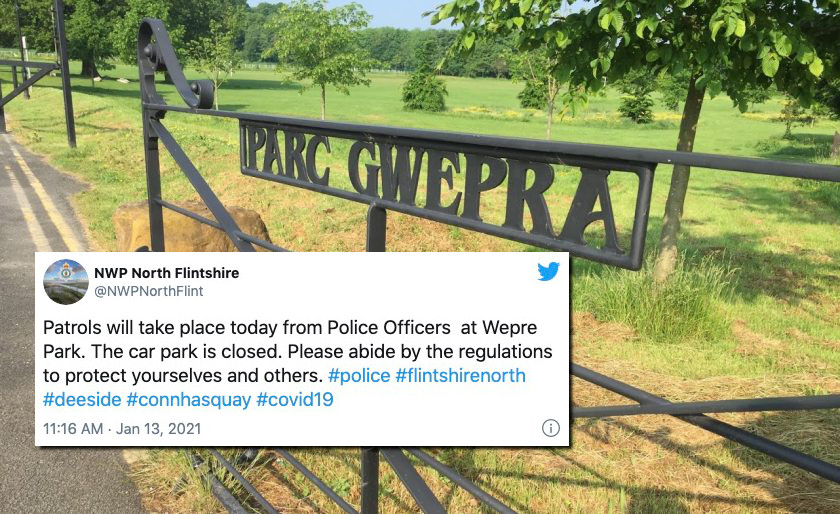 Police have said they will be patrolling at Wepre park today and have asked the public to “please abide by the regulations to protect yourselves and others.”

A number of car parks at beauty spots in Flintshire have been closed until further notice because of people ignoring the coronavirus restrictions.

Flintshire Council said the decision had been taken because of the high number of visitors travelling by car to its country parks.

The alert level four measures in place in Wales require people to start and finish their exercise from home and not to travel in order to do so.

However, there were reports that the car park at Wepre Park in Connah’s Quay was particularly busy over the weekend, leading to it being shut.

Closures have also been carried out at other countryside locations nearby, including Waun y Llyn on Hope Mountain and Moel Famau.

Police have also said they will be patrol “remote hotspots”including Hope Mountain and Halkyn Common after “various reports of discarded items” including nitrous oxide canisters.

We continue to receive various reports of discarded items in locations such as HOPE MOUNTAIN, HALKYN COMMON etc. As well…

The local authority’s deputy leader Carolyn Thomas urged members of the public to stick to the guidelines to reduce transmission levels.

She said: “For several weeks extensive national, regional and local messaging has made it clear that people should stay at home and not travel unless it is for an essential reason such as work or health.

“Travelling for exercise is not classed as an essential reason and exercise should start and end at home.

“We were hoping to keep the car parks open under level 4 regulations for local people with mobility issues but the selfish and thoughtless actions of people disregarding the rules has meant we have had to close them on the advice of the police.”

“At the request of North Wales Police the car park was closed, as was the car park at Waun-y-Llyn Country Park on Hope Mountain which was experiencing similar problems.

“This decision was not taken lightly and we are aware of the potential effects of the decision to close Wepre Park car park on the local area.

“We will continue to work closely with North Wales Police, who will maintain patrols in the area to ensure compliance with Covid regulations and that people park safely.”