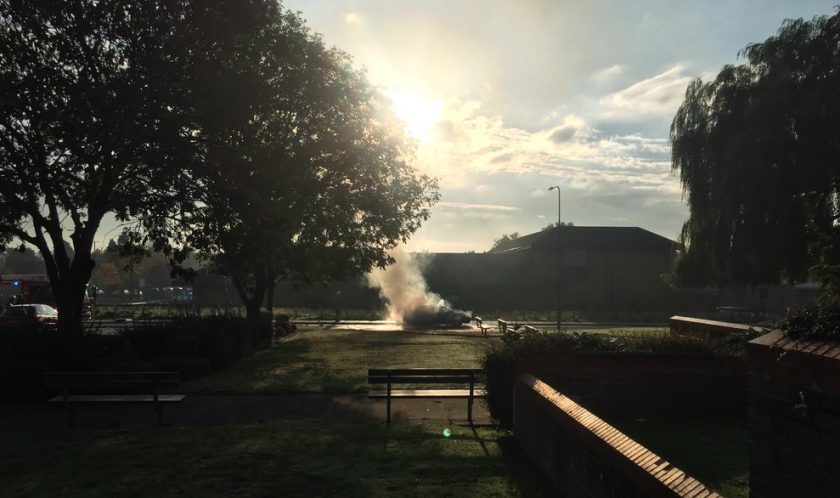 A 46-year-old local man who suffered severe burns in a car fire in Connah’s Quay has died.

Emergency services were called at 8.30am on Friday to reports of a car fire on Wepre Drive.

A crew from Deeside fire station went to the scene close to Connah’s Quay swimming baths.

On arrival firefighters found a man with serious burns outside the car, he was treated by paramedics at the scene and taken to hospital in Merseyside.

Flintshire County Councillor Andrew Dunbobbin was one of the first on the scene, he was on his way to Broughton with his wife when they saw smoke rising from the area he said it was a “truly horrific scene.”

“I saw the smoke along the main road and immediately went to help.

The car was in flames and the poor driver was as well.

It was a truly horrific scene.

The man was engulfed in flames, we were shouting for him to lie down so the flames would extinguish.

It was horrible and felt so helpless.”

Police said they are not treating the death as suspicious.

The family of the man who was from Mancot have been informed.

“This was an extremely distressing incident which has impacted greatly on the local community and in particular on those who tried to help.

“I would like to thank those who tried to assist.”

Police have appealed to anyone who may have witnessed the incident at around 8.31am on Friday 19th October, or who may have dash-cam or video footage to contact them on https://www.north-wales.police.uk/contact/live-chat-support quoting reference W1492

The criteria for which patients will be treated at the Rainbow Hospital in Deeside Leisure Centre has also been widened to include more unwell patients. (LINK)