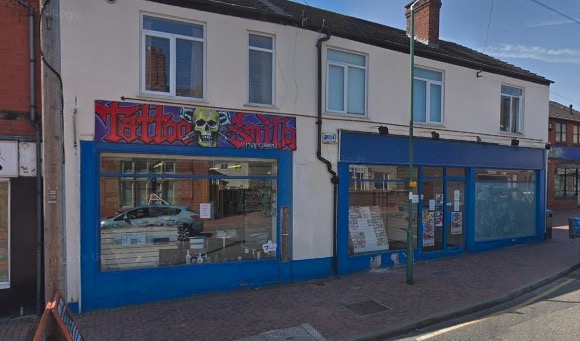 Plans to turn two shops in Buckley into apartments have been thrown out amid concerns it would harm efforts to regenerate the town centre.

Councillors met this week to decide on proposals to convert a tattoo studio and empty shop next door on Mold Road into three flats.

Paul Smith, who owns the studio known as Tattoo Smith, was behind the application, which was recommended for approval by officers from Flintshire Council.

He previously explained the scheme had been put forward for financial reasons.

But community leaders expressed strong objections at a time when the town council is in discussions with the local authority on how to revitalise the main shopping hub.

Cllr Andy Williams, whose ward the shops fall under, said: “Buckley is hopefully on the up because there’s a lot of diverse shops there now.

“I don’t think we should lose another commercial property.

“This one wasn’t advertised at all and just because one shop fails it doesn’t mean to say all the other shops will fail.

“It should have been advertised and we should’ve seen what we could get in there.”

This week it was announced that a public consultation was being launched regarding potentially reopening Buckley’s high street to traffic in a bid to attract more visitors.

He added the upper floors of the building had already been turned into two apartments and the principle of the development was seen as acceptable.

However, Buckley Bistre representative Richard Jones disagreed with his assessment.

Speaking at Wednesday’s planning committee meeting, he said: “I think that this development would overburden the mix of uses within the town.

“Towns could lose their identity and become residential shells, where residents have to travel out of the town to do their shopping.

“We need to invest in our towns and not turn shops into residential areas.”

Despite the opposition, some councillors argued in favour of the scheme.

They included Derek Butler, Labour’s cabinet member for economic development, who said having more people living in the town centre would increase trade.

He said: “Within the core retail centre there are a lot of empty properties.

“If you don’t fill your core retail centre as a priority then those on the fringes will not get filled in the long term or be sustainable.

“The current and emerging national policy from Wales with this new money that may be coming along about core retail centres is about that fact.

“It is also about night time economy and bringing people back to town centres so they live on the doorstep of commercial and retail opportunities.”

The plans were refused by eleven votes to five at the end of the debate because of the loss of the retail units and the impact on the vitality of town centre.