Traffic Wales, the Welsh Government Highways Agency is asking drivers heading up the A55 to Llandudno this bank holiday weekend to plan ahead.

It takes over the main streets of Llandudno for the full three days, bringing Vintage attractions, Entertainment and Funfair.

Across the UK thirteen million leisure trips are expected to be taken by car this weekend, the busiest in three years, according to research conducted by the RAC.

Friday is expected to be busiest with around 4.4m separate leisure journeys by car, 1.5m more than the same day last year, followed by Saturday.

Traffic Wales has published a chart showing the average travel time between Ewloe and junction 19 of the A55, the Llandudno turn off.

Friday afternoon is expected to be the busiest time to travel along the westbound A55 to Llandudno from Ewloe.

Average journey times rise from 40 minutes to 55 and 65 minutes between 4pm and 8pm.

Saturday sees a spike between 9am and 1pm as does Sunday. 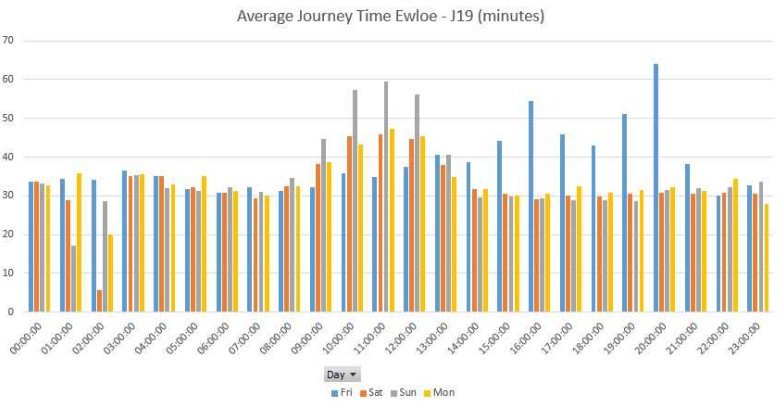 The RAC says that unlike last bank holiday just two weeks ago, the weather looks to be considerably cooler and drivers risk starting the day with a breakdown before they’ve even set off if their battery is on the blink.

RAC Breakdown spokesman Rod Dennis said: “Despite it looking like the weather will take an usually cold turn for the start of May – certainly after the recent Easter heatwave – our figures suggest drivers are still keen to make the most of the long weekend, with significantly more saying they are planning a leisure trip by car this year than in recent years.

“The advice is again to try to use the roads when they are quieter, which primarily means avoiding Friday afternoon and evening if possible, and setting off earlier on Saturday, especially if travelling any great distance.”