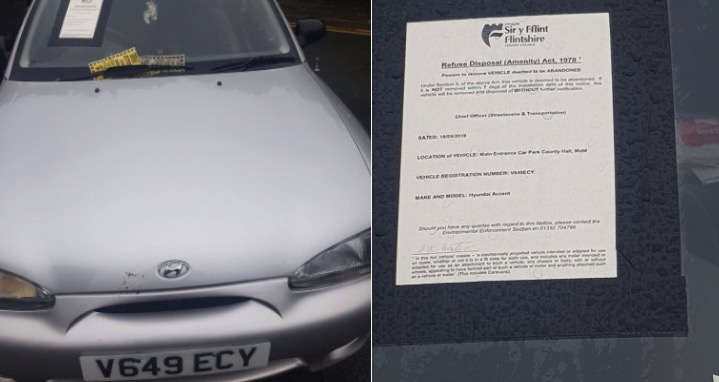 Mystery surrounds the ownership of a car which has been abandoned outside Flintshire Council’s HQ.

The silver Hyundai vehicle has been left in a pay and display car park at the front of County Hall in Mold for several weeks.

During that time, enforcement officers have placed two parking tickets on the windscreen.

However, no-one has come forward to claim the car which records show was originally manufactured in 1999.

The local authority has now revealed it intends to remove the car unless the owner makes themself known.

Steve Jones, chief officer for Streetscene and transportation, said: “Notice was served on the vehicle in order to establish its owner and attempts are now being made to make direct contact with them.

“In the event that the vehicle has not been removed this week, it will be removed by the council.”

According to the DVLA website, the car has not been taxed since the end of March.

A notice placed on the vehicle under the Refuse Disposal Act states: “Under section three of the above act, this vehicle is deemed to be abandoned.

“If it is not removed within seven days of the installation date of this notice, this vehicle will be removed and disposed of without further notification.”