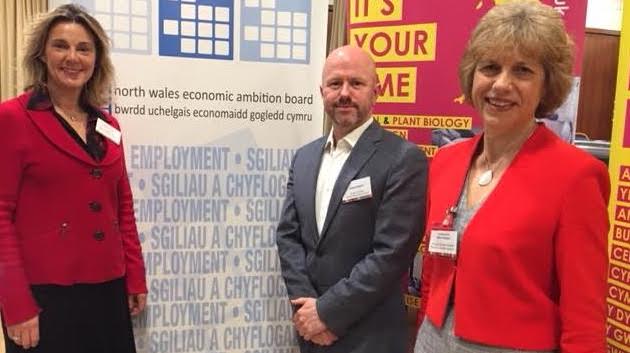 Key players in academia, government and industry have come together to drive forward plans to boost skills across North Wales and the North West of England.

At the cross-border skills symposium at Theatr Clwyd, Mold, a panel of experts from the region’s leading businesses and higher education institutions met with politicians to discuss the findings of a study into the retention and attraction of talented graduates.

The study, designed to help drive the development of the economy and wider community across North Wales and the Mersey Dee area, was led by Wrexham Glyndŵr University.

Working alongside Bangor and Chester Universities, the project was designed to find out how many graduates from the combined three universities stayed in the region and gained employment in key sectors of industry such as advanced manufacturing, energy, financial services and tourism.

Wrexham Glyndŵr University Vice-Chancellor Professor Maria Hinfelaar said: “These sectors are expected to grow in the coming years, supported by private sector investment as well as public funding such as the North Wales Growth Deal.

“The data gathered in the study showed that the majority of the graduates from the three universities actually work in the cross-border region, and our region does much better than other parts of the country in retaining its graduates. This is in spite of past concerns about a ‘brain drain’ from the area.

“It also became clear, perhaps unsurprisingly, that the key economic sectors in the region employ many of these graduates – but more will be needed in future.”

Once the report had been presented, an industry panel debated its results – and what they considered to be the strengths and challenges of the region.

Airbus, Unilever, Horizon Nuclear Power, the Institute of Directors, the Chamber of Commerce and Denis Ferranti Group sat on the panel and contributed to the discussion alongside politicians including Ken Skates AM, Cabinet Secretary for the Economy and Transport, and Ian Lucas MP, Chair of the All Party Parliamentary Group for the Mersey Dee North Wales area.

Professor Hinfelaar added: “The industry panel were all in agreement that improvements to road and rail infrastructure are needed, as well as coordination of rules and regulations on both sides of the border between England and North Wales so that people and businesses can thrive.

“The symposium was a tangible example of collaboration between the universities themselves and with the business community, which was very welcome. It was further supported by the North Wales Economic Ambition Board and the Mersey-Dee Alliance.

“Ken Skates AM made clear his strong view that government policy should encourage cross-border working, and Ian Lucas MP spoke as the Chair of a cross-border all-party group of MPs – so the initiative had support all the way from Cardiff to Westminster.

“As a University, we are at the heart of our regional community, provide the highly-skilled graduates our unique cross-border region needs.

“We are very grateful to all those who participated in the symposium – it’s a key part of that vital work.”