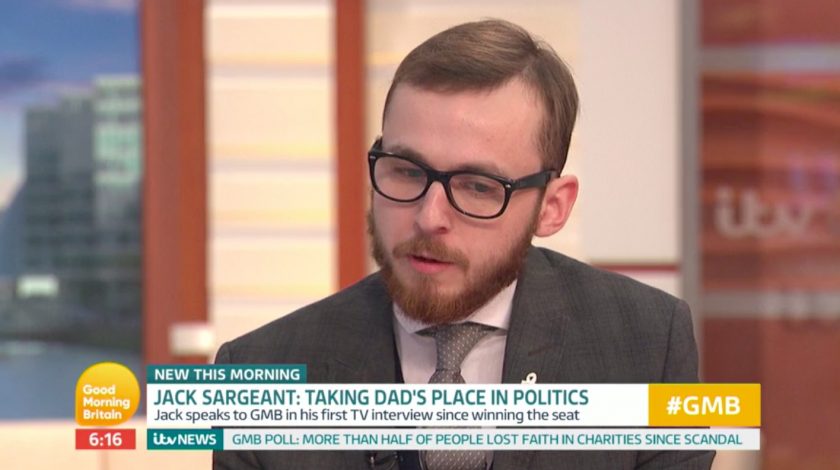 New Alyn and Deeside AM Jack Sargeant spoke of a need for ‘kinder politics’ during an interview on ITV’s Good Morning Britain earlier today.

The 23 year old Labour AM was speaking to Susanna Reid and Kate Garraway this morning about his election victory which he won with a majority of over 6500 votes, he said the election, which was brought about by the death of his father Carl Sargeant, was a ‘bittersweet moment.’

Mr Sargeant succeeded his late father in the Welsh Assembly after winning the Alyn and Deeside by-election on February 6, he said; “we should focus on the positives of the election and its an opportunity for a kinder politics and its something i’m really looking to push.

“It was a by-election that none of the candidates thought they would be standing in, certainly not myself or any of my family – but now is an exciting time” Mr Sargeant said, adding he was “looking forward to the job in hand.”

Asked about the allegations made against his father Mr Sargeant said:

“Dad strongly denied them, I stuck by him and so did the family. But we’ve got to move forward, all those circumstances are with the inquiry and the lawyers at the moment and i’m focused on supporting the community that supported us.”

“I think it’s a kinder politics, but not just in politics itself it’s kindness in life.

We should remember that, that’s something I’ll be pushing going forward, but also let’s look at the values that I learnt as a little lad in school of ‘if you can’t say anything nice, don’t say anything at all.

And that’s something that we should look at in politics, but also in life in general, we should never intentionally hurt anybody.

We will at times, because that is life, but we should never intentionally do that.

And we should all be conscious to be kinder to everyone.”

Opposition parties are to force a vote next week calling for the publication of a Welsh Government report into whether the sacking of Carl Sargeant was leaked.

Welsh Government Permanent Secretary Shan Morgan conducted an inquiry into whether a cabinet reshuffle in which Carl Sargeant lost his job was leaked to a third party and members of the media.

The inquiry found “no evidence of prior unauthorised sharing of information”

Labour AM Lee Waters said he received a text message in advance of Carl Sargeant’s sacking telling him the the Communities Minister was to be removed from the cabinet.

An independent QC-led inquiry is looking into how Wales first minister Carywn Jones handled the dismissal of Carl Sargeant.