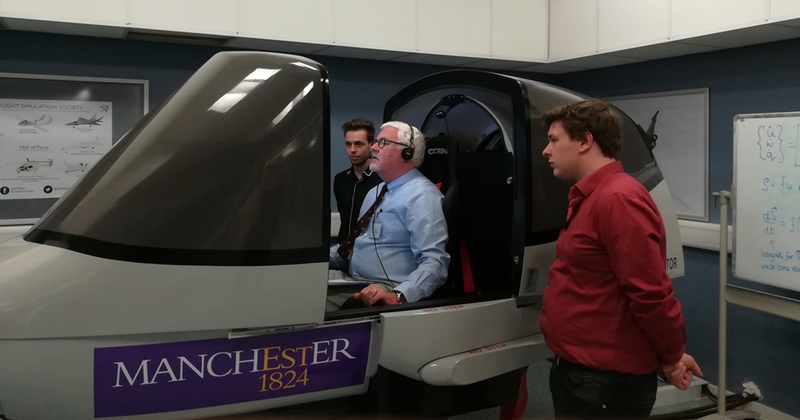 A team of university students have put their skills to the test at an annual flight simulator competition.

The team of four German students – who have spent the past year at Wrexham Glyndŵr University working on their dissertation project –designed an ultra-light, propeller-driven aircraft using Merlin software and a state of the art flight simulator at the Plas Coch Campus.

Designed Mario Häbe, Klaus Siebenäuger, Kevin Besinger and Manuel Zapke the aircraft was put through its paces at the Merlin Simulation Group’s annual ‘It Flies!’ aircraft design and handling competition.

Experienced test pilots, Dave Southwood, and Gordon McClymont evaluated the simulations at the competition – which was held at the University of Manchester – to assess whether they flew correctly, and participants also gave a presentation on the aircraft’s design.

Lecturers Nick Burdon and Zheng Cheng also supervised the team at the competition.

Nick said that the result was an impressive performance, particularly given the high standard of entries.

“When we put an entry in around 10 years again, some of the competition that we were up against didn’t even fly – they were struggling to get off the ground during the take-off roll,” he said.

“Every aircraft [at this year’s event] that the students put in was fully functional and doing what they were intended to do – it was really fine detail that they were having to use to choose one aircraft over another.”

Nick added that the achievement was all the more impressive because the students had only studied aeronautical engineering during their one year stay in Wrexham, whereas many of their fellow competitors had studied the subject for three years.

“These students from Germany have a mechanical background, but they’ve come to Glyndwr to experience aeronautical engineering as an extension of their studies,” he said.

“They had never studied aeronautical subjects so they’ve gone from general mechanical engineering, through to a group of students who could actually design a plane that flies.

“To get it to such a level that they could actually get an aircraft together, get it flying and be able refine the aircraft and understand what effect each change has is quite an achievement.”

The students returned to their homeland after the competition, but Nick told how they had enjoyed a “very positive experience” during their year in North Wales.

“One of the students mentioned that a friend of his is looking to come here for the next academic year based on the description of what he was doing this year,” he said.