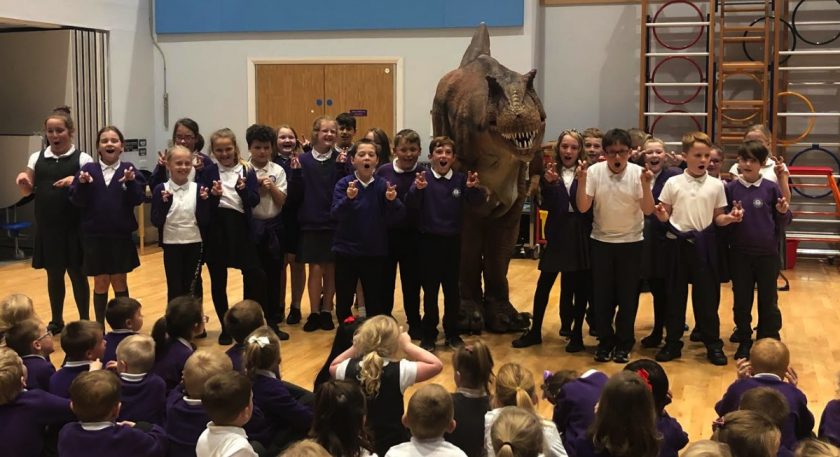 Holywell youngsters get to meet T-Rex

When young pupils at a Holywell primary school were asked what they wanted their ‘adventures’ topic to cover, and they decided to learn all about dinosaurs, little did they know that they would get to meet a T Rex.

The year 1 and 2 Ysgol Maes Y Felin pupils were excited to get started on their new project which held plenty of surprises, including finding a huge golden egg on the school field which the children then had to talk about what might be inside, and record the egg’s progress.

This led to researching which animals hatched from an egg and creating a list of possibilities.  The next development was when the egg was found to have cracked by Mr Thomas, the deputy headteacher. Dinosaur spotting’s followed and the children were required to track what had happened.

Tamsin Nellist, the pupils’ teacher, planned the project and arranged for Education Group, a leading provider of interactive workshops for children, to come in to give short workshops with each year one/two class.

This involved talking about different types of dinosaurs and what they eat, as well as taking part in a fossil dig. An hour long assembly for the whole school was also held and the children had the opportunity to meet a little dinosaur, an allosaurus, who turned out to be a bit feisty and tried to ‘bite’ a member of staff.  Afterwards, the children were introduced to the fierce life-size animatronic T-Rex.

Mrs Nellist said: “The project has been absolutely fascinating, and the pupils worked hard creating lots of facts and information about dinosaurs.

“Throughout the topic the engagement and enthusiasm of the pupils was infectious and the dinosaur workshop at the end seemed the perfect way to capitalise on this.  The children were enthralled, they absolutely loved the whole dinosaur experience and we have achieved some fantastic observations and oracy from the project.”