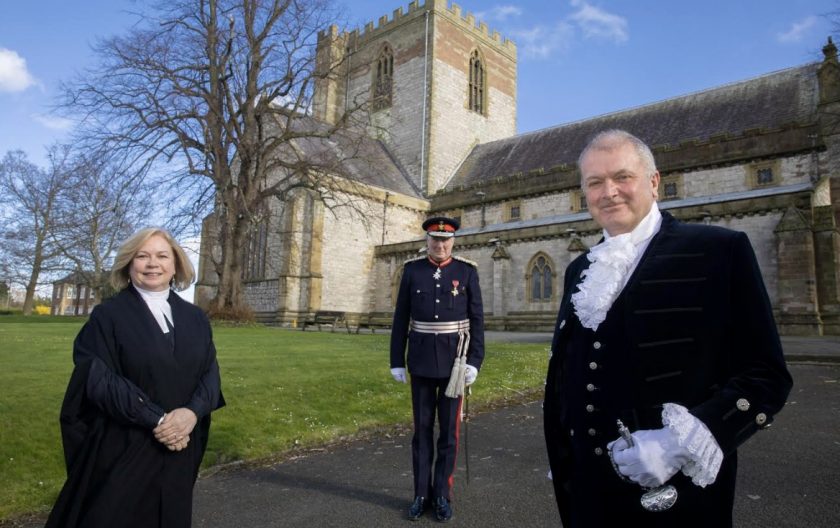 The new High Sheriff of Clwyd has pledged to help support the growing number of people suffering mental health issues during his term of office.

He has taken over in the role as the Queen’s representative in North East Wales from David Wynne-Finch.

The origins of the office date back to Saxon times when the ‘Shire Reeve’ was responsible to the king for the maintenance of law and order within the shire, or county, and for the collection and return of taxes due to the Crown.

Mr Thomas, originally from Sandycroft and a former pupil of Hawarden High School and Kelsterton College, now Coleg Cambria, is now one of 55 High Sheriffs serving the counties of England and Wales.

He joined Airbus 40 years ago as a commercial apprentice before qualifying as a chartered accountant and rose to be the Government Affairs Executive at Broughton.

He said: “I have always felt public-spirited and want to make a positive contribution as High Sheriff of Clwyd and in terms of a theme for the year I have chosen to support MIND, the mental health charity.

I also want to recognise and promote the wider work of the third sector and the many voluntary activities that go on across the county which has been of particular importance this year.

Mr Thomas recently became a trustee of St Kentigern Hospice and is also vice-chair of North Wales Police and Community Trust (PACT), and backs the National Crimebeat charity which promotes law and order and safe environments.

His duties also include supporting the Lord-Lieutenant for any Royal visits to the area and attending on High Court judges.

His involvement in legal affairs will be supported by the Under-Sheriff of Clwyd, Sarah Noton, Managing Director of North Wales and Cheshire law firm Swayne Johnson.

She said: “In my experience over the last few years the High Sheriff has played an invaluable role in the local community in recognising so much of the important and otherwise often unsung work that goes on in that community and perhaps that has never been more true than at this time.

“The work of the High Sheriff is also important in liaising with the police and the judiciary and as a facilitator in bringing together people in the community in which they serve.”

Mr Thomas and his wife, Sally, have five children, and as well as enjoying gardening and the theatre, he is also an avid sports fan, following Wales and regional side RGC in rugby, cricket at Colwyn Bay Cricket Club and the fortunes of Wrexham FC.

He added: “I am looking forward to the experience and meeting the many people this role will afford.

“I have a shift planned on the beat with police officers and visits to HM Prison Berwyn, the probation service and the fire and ambulance services as well as many schools across the county.

“It’s a wide remit and I’m genuinely looking forward to it and hopefully as High Sheriff I can add some value, profile and support to worthy causes.”